The Prince of Darkness looked more like a soaked kitten.

Ozzy Osbourne stood center stage dripping wet, covered in foam. Thanks to the fire hose he used to liberally douse both himself and fans in the front half of the floor, Ozzy looked like he’d just fallen into a bathtub. The foam would dissolve, but Ozzy would never dry out.

Ostensibly in town to promote a new album, Ozzy performed just one new song.  Most of the rest of the setlist could have been written months in advance by a causal fan. But while the songs didn’t hold any surprises, many of the performances were still vital.

Although some of his solo material hasn’t aged as well, the three-quarters full house still reveled in the night, pumping their fists during solos and singing along. During “The Road to Nowhere” and “Mama, I’m Coming Home” the room lit up with lighters.

“Mr. Crowley” was an early highlight. Keyboard player Adam Wakeman, son of Rick Wakeman, turned the room into a giant cathedral with his ominous organ. As he played, a sheet of sparks feel from the rafters behind Ozzy, creating a curtain of fireworks.

Although there was a large video screen behind the band for most of the set and plenty of pyrotechnics, Ozzy’s oversized persona was the best visual effect of the night. Waterworks aside, he was constantly in motion, urging the crowd to clap, hopping up and down like a frog or bowing to his audience. During “Fire in the Sky” he writhed his arms and body during the lengthy guitar solo as if performing some Satanic jujitsu.

The two-hour set lagged quite a bit toward the end. It would have been difficult to maintain the energy and momentum of the opening numbers, but back-to-back, cliché-ridden guitar and drum solos deflated the show. Everyone would have been better served had the band performed two 45-minute sets with an intermission.

Fortunately Ozzy still had plenty of goodies buried in his catalog. “Crazy Train” brought the crowd back to life, while “Mama” and “Paranoid” ensured most of them would show up next time for his inevitable return.

Slash: Axl Rose is notorious for making fans wait hours before appearing; Slash came onstage 10 minutes early. His one-hour set was basically a truncated version of the show he put on last fall at the Voodoo Lounge. It was heavy on Guns ‘N’ Roses, with most of the songs coming from “Appetite For Destruction.” The Velvet Revolver material held its own, but some of the newer songs lost the crowd, especially “By the Sword.”

For a band so reliant on its guitarist, the mix was atrocious. All the instruments were trapped in a mush under bellowing drums and vocals that sounded like they emanated from a tin-can telephone. Fans may have been better served sonically by asking their next-door neighbor to play “Appetite” at full volume, then retreating to their basement and listening to it from there. Although the sound got better at times, the closing solo during “Paradise City” was practically inaudible.

Slash will always be known as the top-hatted guitarist for Guns N’ Roses, but he’s built quite a body of work in the 15 years since leaving that band. Thursday night at Harrah’s Voodoo Lounge, Slash drew on all phases of his career – Snakepit, Velvet Revolver, his new solo album and, of course, Guns N’ Roses – during his two hour performance.

The early numbers were a quick survey of Slash’s career. “Ghost,” a number from his new self-titled effort opened the proceedings with a slinky, sleazy guitar riff. It was followed by the rough stomp of “Mean Bone” from Slash’s Snakepit days, the “Appetite for Destruction” classic “Nightrain” and Velvet Revolver’s “Sucker Train Blues.” 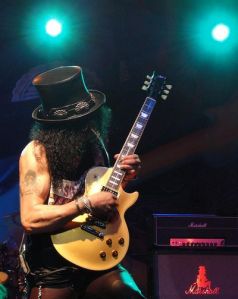 After a strong opening, the set got even better. “Back to Cali,” another new track, opened with vocalist Myles Kennedy of Alter Bridge and Slash standing shoulder-to-shoulder during a heated call and response that brought to mind Jimmy Page and Robert Plant. Both “Cali” and “Do It for the Kids” rocked harder than anything Slash’s former band came up with for “Chinese Democracy.” “Civil War” and “Rocket Queen,” two of the brightest moments from Slash’s Guns glory days, came next.

Guitarist Zakk Wylde once said playing with Ozzy Osbourne was like being in a glorified cover band, because the performances encompassed material from different eras and songwriters. The same could also be said by Slash’s four new band mates, but they didn’t seem to mind helping Slash recreate his finest moments any more than Wylde did with Ozzy.

Kennedy easily conjured the ghost of Axl Rose, replicating his vocal tics right down to the radio commentary at the end of “Civil War.” He had no problem nailing the high parts on “Rocket Queen,” either. Together, Kennedy and bass player Todd Kerns – who delighted romping around the stage and lip synching to all the Guns N’ Roses songs – came close to capturing the spirit of Velvet Revolver singer Scott Weiland’s tone.

Although the singer is generally regarded as the front man, this was purely Slash’s show. Kennedy dutifully moved himself and the mic stand back by the drums during each solo so Slash could have center stage. Although primarily stationed at stage left, the crowd followed Slash’s movements across the stage like plants chasing sunlight. Kennedy’s one moment in the spotlight came late in the set when Slash relinquished lead guitar duties during a cover of Alter Bridge’s “Rise Today.”

If the first half of the concert was a showcase for great songs Slash helped write, the second half was dedicated to showing off his guitar skills. Slash is the king of the oily riff that goes down smooth and leaves you feeling dirty. Those skills, however, tend to perish without the structure of a song.

Exhibit A was a tedious five-minute blues jam that culminated in the theme from “The Godfather,” another several-minute exercise. After noodling around for nearly 20 minutes – the blues jam was preceded by the instrumental “Watch This” – Slash ended his solos in the best way possible by dropping into the signature riff to “Sweet Child O’ Mine.”

Kennedy held the mic stand over the re-ignited crowd and let them lead the chorus, a trick he would perform again a few minutes later during “Paradise City.” The closing song, it encapsulated all the best elements of the night: energetic crowd participation, big riffs, great songwriting and killer solos. The night ended with some of Slash’s best solos as the ensemble stretched out over the melody.

For $30 fans could take home a recording of the concert. A line was already forming at the table in the back as the band took their final bows. The CDs are a nice souvenir for dedicated fans, but it’s hard to imagine any casual “best of Slash” playlist deviating too much from what he delivered onstage.

(Above: The long version of “Don’t Stop ‘Til You Get Enough.” Soak in all six minutes – then play it again.)

In the wake of Michael Jackson’s death, I wrote about the Michael I liked best. The young Michael, who fronted the Jackson 5, grew into his own and delivered his greatest statement and one of the best pop/dance albums ever on the cusp of the ’80s.

But that isn’t the Michael Jackson I remember. I recall the Jackson’s Victory tour kicking off at Arrowhead in 1984. Everyone at swim lessons that day was talking about it, but I didn’t really know who Michael was and what the fuss was all about. I have no memories of Michael’s follow-up stops at Kemper Arena four years later.

Later, all I knew about Michael Jackson were the Weird Al parodies, the “sha-mon” self-parodies and – Eddie Van Halen and Slash’s guitar solos aside – a bunch of slick pop that didn’t conform to my burgeoning rockist sensibilities.

Retrospectively, it’s easy to turn the finger on myself and laugh at how ignorant and dismissive I was at the time. In my defense, “Bad” and “Dangerous,” the two Michael Jackson albums that hit when I was coming of musical age, were unsuccessful attempts to replicate “Thriller.” By the time giant Jacko statues were floating in the Thames River to promote “HISstory,” Jackson was so far removed from his glory days and so entrenched in the paparazzi-enabled tabloid journalism that defined his life that I couldn’t take him seriously as an artistic force.

When someone tried to explain to me that the ghost-white, thin-nosed Jacko on the talk shows was the same African-American child who sang those Jackson 5 songs, I balked for two reasons. Firstly, it’s still hard to believe anyone could transform so drastically over such a short period of time. More importantly, however, those songs were great! They may have been created with the same crass marketing motives that plagued post-“Thriller” Jackson, but somehow this stuff more than held up.

One of the guys in my dad’s National Guard unit used to play “ABC” so often that my dad said he never needed to hear the song again. I can see where my dad was coming from; that could be pretty annoying. But I can also understand the impulse to play that song over and over. Great songs create a world we get to live in for a few minutes. Usually that world vanishes into the next track sooner than we’d like, and when it does you have the immediate desire to return. At two minutes, 30 seconds, “ABC” is not long enough.

Fortunately, I can make a playlist shoving “ABC” against “I Want You Back,” “Black and White,” “I’ll Be There,” my all-time favorite Michael jam “Don’t Stop ‘Til You Get Enough” and the rest of his finest moments. It will be in the air for the rest of the weekend, allowing me to live in Michael’s musical world once again.