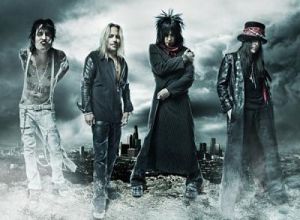 Motley Crue’s “Dr. Feelgood” album may end with the ballad “Time For Change,” but Sunday night the band gave its fans at the Sprint Center nearly two hours of the same ol’ situation.

Celebrating the 20th anniversary of the “Feelgood” album, the hair metal icons spent the first hour of their set playing it in order. Kicking off with the title track, the band performed in a small padded cell erected onstage. It looked pretty cool head-on, but offered zero visibility from the sides or the rafters. Fortunately the cell went away and the stage opened up as the quartet slid into the second number, “Slice of Your Pie.”The performance capped the six-hour Crue Fest 2 that also featured Godsmack, Theory of a Deadman and Drowning Pool. The audio quality in the three-quarters-full arena was solid, given that the day’s style of music didn’t demand any attention to its nuances.

Resurrecting albums in concert is the latest rock trend, but it’s a rarely a sure-fire success. Most albums have – no matter how classic – have a few tracks that can be skipped, and what goes down well on album doesn’t always play well live.

“Feelgood” is a great example. On the one hand, fans got to live top-to-bottom the record from the band’s most successful period. However, there were good reasons why songs like “Without You” and “She Goes Down” were mothballed.

Pacing was another issue. The massive response to “Kickstart My Heart” was tempered by the ballad “Without You” and a bizarre Tommy Lee solo moment onstage where he chastised security for not tossing drumsticks into the crowd that landed short of the barricade.

The Crue seemed looser and happier when they shed the album cycle. After a Mick Mars guitar solo, the band tore through their favorites with an energy that ignited the already-reved crowed.

“Saints of Los Angeles” was one of two songs performed that didn’t date from the ‘80s and one of the stronger moments. Although it is just a couple years old, the audience sang along with every word. The pyro-heavy closing set was at its peak during “Wild Side” and “Shout at the Devil,” when flashpots erupted with every “shout.”

Lee slid behind the piano bench for “Home Sweet Home” as his bandmates crowded around the grand piano like drunken saloon crooners. After picking up an assist from the two omnipresent female backing vocalists/dancers during the electric section, the song ended with Lee and vocalist Vince Neil singing from the piano bench together.

The backing singers wore black leather boots that would have made Gene Simmons envious and legs that would have made him covetous. After one hour and 45 minutes onstage, the women – who were barely older than the “Dr. Feelgood” album the evening celebrated – showed off their assets as the band roared through “Girls Girls Girls.”

Godsmack: I arrived about 20 minutes into the metal quartet’s one hour set. The Massachusetts-based band had spent some time apart, but is back on the road for the first time in over a year celebrating its 10th anniversary. Their setlist was heavy on the hits, and included one new song, “Whiskey Hangover.”

The band also celebrated the acts that inspired them, tossing a bit of Pantera’s “Walk” into “Keep Away,” which drew a huge response. Later on, singer/guitarist Sully Erna hopped behind a second drumkit for a friendly drum duel. As the drummers went back and forth, the band slipped in snippets of their favorite tunes, letting the audience supply the words. Some of the choices, like “Back in Black,” “War Pigs” and Led Zepplin’s “Moby Dick,” were expected. “Aqualung” and “Tom Sawyer” hinted at a different side of the group.

After a one-two punch of “Whatever” and “I Stand Alone,” the band ceded the stage to Motley Crue with the promise of more new music to come. In a few years, it wouldn’t be surprising to see them headlining their own rock caravan.