Skip to content
(Above: Unplugged or electric, Los Lobos know how to move a crowd.)

To celebrate how far they have come as a band over the last 40 years, Los Lobos went back to where they started.

Over the course of more than a dozen studio albums, the quintet from East Los Angeles has covered folk, blues, R&B, film scores, and traditional and experimental rock. For two hours on Friday night at Yardley Hall, the only English spoken came between songs, and there were no electric guitars in sight.

Instead, the set list focused on traditional Tex-Mex and Latin American songs, with a few originals tossed in for good measure. Despite their different sources, the material blended perfectly.

The songs also displayed different strengths and talents. Several showcased excellent three- and four-part harmonies. Guitarist David Hidalgo not only played violin during “El Gusto,” he also sang a lead vocal line that took him into falsetto on the chorus.

Perhaps the best singing of the night came during “Sabor a Mi.” The ballad allowed Cesar Rosas to show off a range and expression only hinted at on the band’s mainstream releases.

Taking the stage, spaced evenly in a single row across the front, Los Lobos opened with “Yo Canto,” a track from their latest album, 2010’s underrated “Tin Can Trust.” The song was typical of the night: rapid tempo, high energy and spot-on. In fact, the band slowed down only twice before pausing for a 20-minute intermission.

Behind the band rested enough guitars of different sizes and shapes to open a music store. Conrad Lozano, the only musician not to trade instruments throughout the night, played an acoustic bass so big it looked like a small rowboat slung over his shoulder with a short neck attached.

Steve Berlin was the night’s not-so-secret weapon. He didn’t play on every song, but his contributions added just the right color to the performance. He played two great soprano sax solos during “Borinquen Patria Mia” and “Bailar la Cumbia.” Berlin’s bass sax on “Chuco’s Cumbia” delivered the deep urgency that made the song hit even harder.

Several numbers were staples of Los Lobos’ earliest repertoire as a wedding and restaurant band. It wasn’t hard to imagine the band’s tip jar overflowing during the final three numbers of the night. “Volver Volver” finally got a few fans on their feet, while “Guantanamera” provided material familiar enough to sing with. Berlin also added a great flute solo on that one.

The quintet returned for a traditional reading of its biggest hit, “La Bamba.” The band has been playing this one since it hit No. 1 in 1987, but as the musicians traded verses and exchanged smiles it seemed no one, onstage or off, had gotten tired of it. 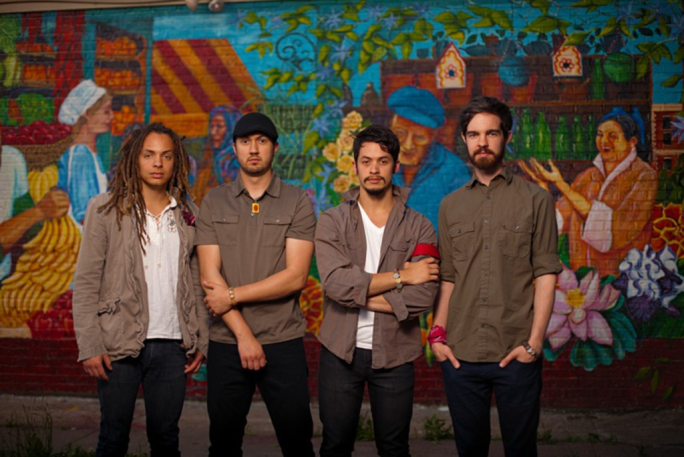 Los Lobos had already played longer than most of their recent Kansas City concerts when the veteran L.A. quintet invited guitarist Enrique Chi and percussionist Juan-Carlos Chuarand onstage for what turned out to be a 25-minute encore.

Chi grew up listening to Los Lobos, and was already excited that his band, Making Movies, would share the bill, let alone the stage.

“I was at the merch(andise) table when I saw Juan-Carlos start to go on and set up his timbales,” Chi said. “I pulled out my phone to film it and on it you can see the tour manager motion for me to come up too. I don’t know if he thought of it beforehand or just saw me and decided I should go too.” 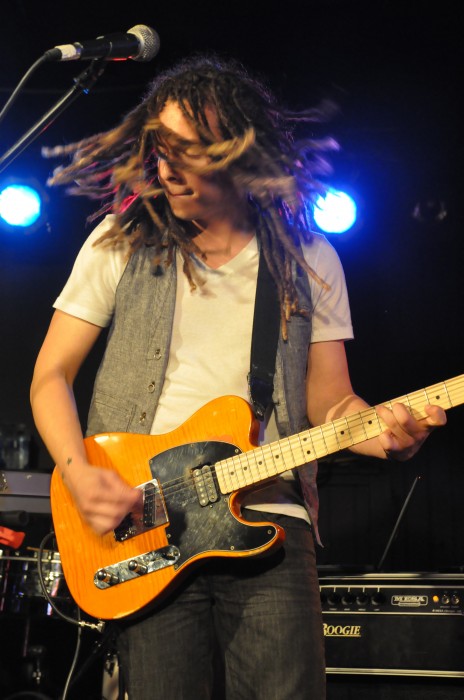 Either way, it doesn’t matter. Chi and Chuarand held their own with their heroes and added another stamp of legitimacy to Kansas City’s local music scene. Without announcing the song or even a key, Los Lobos singer and guitarist David Hidalgo drove the band into “Cumbia Raza.”

“I didn’t know what they were going to play, I just grabbed my guitar and went for it,” Chi said.

Hidalgo and his compatriots were extremely generous, coaxing both Chi and Chuarand into multiple solos, and insisting they stick around for the full encore set. I’ve seen Los Lobos five times in the past decade but had never seen them have as much fun as they were in that moment.

“The whole time I was up there, the adrenaline never wore off,” Chi said. “I though our opening set was good, but I never got that magic moment where your brain turns off and the music just goes through you.”

The moment he started playing with his heroes, though, Chi fell into the zone.

“I was thinking about it later,” Chi said. “You know these guys have been playing together for so long they’re probably able to get to that place without much effort. We were just able to slide into it with them for a while.”

There was little contact between Making Movies and Los Lobos before that magical moment, but the camps have since been in steady communication.

“There have definitely been conversations going back and forth about working together in the future,” Chi said. “I can’t say much beyond that right now.”

Before leaving town, Los Lobos ate at La Fonda el Taquito, the restaurant owned by Chuarand’s family. Making Movies were in Chicago for a show, but Los Lobos stuck around posing for pictures with everyone.

“Since we’re both bilingual bands, I thought it made sense for Making Movies to be there that night,” Chi said. “I never expected this. I was blown away by their generosity. They were very complimentary of us.”

Fourth of July – “Before Our Hearts Explode”

(Above: Los Lobos merge an original with a Neil Young classic on the steps of the Liberty Memorial in Kansas City, Mo. on September, 17, 2004.)

Los Lobos made one point abundantly clear during their opening number, a nearly 10-minute romp through “The Neighborhood”: these boys came to play. One of the most versatile, dynamic and enduring bands going outdid themselves Friday night in front of a sold-out crowd at Knuckleheads. The set was a potent mix of old favorites, new tracks, covers and a mini-set of classic Spanish material in the vein of the band’s “La Pisotla y el Corazon” EP.

Louie Perez, Cesar Rosas and David Hidalgo formed a triple-guitar threat across the front of the stage, but no one seemed to be having more fun than bass player Conrad Lozano, who performed with a perpetual grin throughout the night.Great weather contributed to the celebratory atmosphere. Slightly less than 1,000 fans packed Knucklehead’s patio and spilled into the road, which had been blocked off in front of the venue. “I Walk Alone,” “Main Street” and “Chuco’s Cumbia” were early high points of a set that stretched more than two hours – a half-hour longer than the 90-minute sets the group has typically delivered in previous Kansas City tour stops.

Hidalgo hopped behind the drums during “Don’t Worry Baby” but returned to his guitar for a rousing tribute to Buddy Holly. The Bo Diddley beat of “Not Fade Away” had nearly died when Hidlago resurrected the groove with a reading of “Bertha” that sounded more like the Allman Bros. Band than the Grateful Dead. The players finally shed their instruments, but quickly returned with two new musicians in tow – Juan-Carlos Chaurand and Enrique Chi from the local opening band Making Movies. 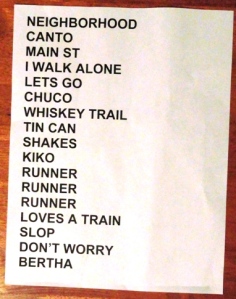 The headliners were more than hospitable during the 25-minute encore, giving both Chaurand and Chi several lengthy solos and letting them trade licks (and more than hold their own) with their heroes. The pair was ready to politely secede the stage after each number, only to have Hidalgo motion to stick around for a little more fun.

Everyone had nearly left the stage when Hidalgo kept stubbornly strumming, hinting at the opening lick of “La Bamba” and sending everyone scurrying back to their instruments. When Perez rolled into “Good Lovin’” a stream of female dancers filled the stage and the crowd carried the vocals, obscuring the boundaries between performers and audience. The medley reached a natural endpoint several times, but the band kept playing, trading solos and smiles.

Buckwheat Brings It Back Home