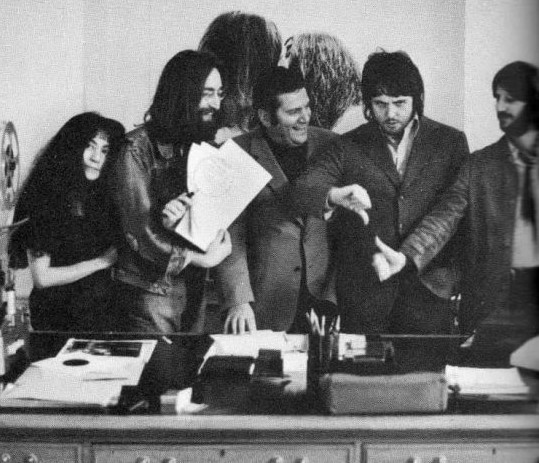 In the new Beatles documentary series Get Back, on the first day of filming after guitarist George Harrison abruptly walked out of rehearsal and left the band, Paul McCartney made a prescient observation:

“It’s going to be such an incredible sort of comical thing, in like 50 years’ time, you know.  They (the Beatles) broke up because Yoko (Ono) sat on an amp.”

For far too long, Yoko Ono has been painted as the villain the Beatles story, The person who turned John Lennon’s heart away from the band and drove a wedge in his partnership with McCartney.

Obviously, these accusations are rooted in misogyny, racism, and ignorance. More importantly, they are now also clearly wrong. Regardless of how the other Beatles felt about Lennon bringing Ono into the band’s inner circle, everyone in the group is clearly over it by the time the cameras started rolling for Get Back. And sure, one could argue that the Fabs were just pretending to enjoy Ono for the sake of the cameras, but if you’ve seen Give My Regards to Broad Street you know McCartney isn’t that good of an actor.

Besides, Ono was far from the only visitor to the Beatles’ sessions. McCartney’s fiancé Linda Eastman and Ringo Starr’s wife Maureen Starkey both show up and hang out while the band is working.  George’s small entourage of Hare Krishnas are seen observing the band at work.  Eastman’s daughter, Heather, tags along with McCartney while the band works during a weekend session.  If Yoko’s mere presence was such a burden, wouldn’t bringing a child into the studio be out of the question?  Nevertheless,  everyone seemingly has fun dancing and playing with Heather.

Furthermore, McCartney is an active participant in not one, but two spontaneous, extended jam sessions where Ono took the mic and lead the way. He appears to be enjoying the moment and the music that comes out of these jams is some of the most riveting, cutting-edge material in the film.

I grew up reading that the sessions at Twickenham Studio were when the band was falling apart and that it was only by moving to Apple Corps headquarters and inviting Billy Preston to participate that the Beatles were saved. Get Back complicates this mythology. Granted, the Beatles seem more comfortable and friendly once they are at home at Apple and Preston joins, but Lennon and McCartney’s relationship is never in doubt for a moment. In fact, many of my favorite moments in the documentary was watching those two bounce ideas around at lighting speed only to fly off on a random tangent and somehow remain in lockstep the entire time.

As for the Beatles growing a part as musicians, Lennon and Harrison discuss this in the third part of Get Back. After working on “All Things Must Pass” and “Let It Down” the day before the famous rooftop concert, Harrison told Lennon about all the songs he’d written.

“I’ve got so many songs that I’ve got, like, my quota of tunes for the next ten years, or albums,” Harrison said. “I’d just like to do maybe an album of songs.”

Lennon asks Harrison if he means this to be a solo album, which Harrison confirms. The two seem to agree on how solo projects could co-exist with the Beatles.

“You see it’s good if we put out an LP and it’s safe that The Beatles are together, but George is doing an album,” Lennon said. “Same thing as me doing an album.”

Harrison picked up the thread.

“That way it also preserves this, the Beatle bit of it, more,” Harrison replied.

So, if Yoko is not obviously disruptive and the Beatles were clearly open to a looser unit where partners, family, friends, and musical collaborators could come and go without undermining some special Beatles magic, we must look elsewhere for reasons for the Beatles’ falling out.  Get Back shows that the Lennon-McCartney partnership is still working.  And there seems to be enough flexibility within the group for solo projects to exist alongside Beatles releases.  So, why did the Beatles break up? The answer to this question never appears on-camera in Get Back, but he lurks in the shadows of the second and third parts.

Two days before the rooftop performance, Lennon arrives at rehearsals glowing over his conversation with Allen Klein the night before. Klein is the Rolling Stones current manager and managed Sam Cooke before the Stones. One of Klein’s major calling cards was that he would bulldog the labels into giving his artists everything they were owed (lining his own pockets in the process). Klein wormed his way into Lennon’s heart by talking about a benefit concert for the war-torn Republic of Biafra.

“He knows what we’re like, you know, just from the pick-up,” Lennon gushed. “I mean, he said he had to see me to know exactly if he was right or not. But the way he described each one of us, you know, and what we’d done and what we’re going to do, and that …. He knows me as much as you do. Incredible guy. We (Lennon and Ono) were both just stunned.”

Lennon is still talking about this conversation with Klein the next day as well. Producer Glyn Johns knew Klein from his work with the Rolling Stones.

“I don’t know if he speaks to you the same way as he does other people – perhaps not, because you’re who you are,” Johns said. “But he can take anything you say, if he disagrees with it … I don’t know … he can convince anybody of anything. I mean, I could say this piano is black, you see, right, and in five minutes he’d have me believing it was green.”

Klein came to the Beatles in a vulnerable moment. The group established Apple Corps as tax shelter, but were hemorrhaging money. Klein promised to fix Apple’s financial problems and end the days of the Beatles being played as suckers.

A few days after meeting with Lennon, Klein met with the rest of the band. Lennon was already on board, but his enthusiasm pulled Harrison and Starr on board as well. McCartney was suspicious of Klein and wanted very little to do with him.

McCartney tried to persuade his bandmates to sign with Lee Eastman, his father-in-law. Smelling nepotism, the other three declined. Lusting for the whole Beatles enchilada, Klein made the relationship between himself and Eastman as rocky as possible, pitting his three clients against McCartney. Ultimately, McCartney had to sue Lennon, Harrison, and Starr to dissolve the Beatles partnership.

Ironically, while Klein was gunning for the Beatles, his other clients, the Rolling Stones, were growing dissatisfied. Never one to leave money on the table, Mick Jagger was suspicious of how Klein always managed to turn a personal profit in the band’s business affairs. In 1970, the same year McCartney was suing the other Beatles, Jagger announced Klein was no longer the Stones’ manager.

By the middle of 1972, Harrison and Lennon were fed up with Klein as well. Klein helped Harrison organize a benefit concert like the one that had enchanted Lennon. Harrison’s groundbreaking Concert for Bangladesh at Madison Square Garden brought out some of the biggest names in music and resulting in a triple-album set and film that raised millions.

Unfortunately, Klein botched the paperwork, which meant Harrison had to pay taxes on the amount raised. It also came to light that Klein was making more than $1 from each copy of the live album, which sold for $10. Lennon was upset that Klein wouldn’t give Ono’s career the same support and attention that he gave the other former Beatles. In 1973, Lennon, Harrison and Starr announced they wouldn’t renew Klein’s contract.

Is it fair to blame the Beatles demise on Klein? In the short term, he made the band a lot of money, but he lined his own pockets with some of it and refused to cooperate with McCartney and Eastman. McCartney could have done himself a favor and selected someone other than his father-in-law as an option to manage the band. It’s also important to note that the Beatles were all in their late 20s at the time Klein entered their lives. Twenty-something millionaires aren’t known for their prudence.

Given that so-called “creative differences” were never the problem in the Beatles, it should not be a surprise that the Get Back/Let It Be sessions were musically successful.  What is surprising it that this project and the band’s final masterpiece Abbey Road were able to happen at all while the band struggled with the financial and managerial issues that clearly taxed their native capacity and opened them up to opportunists and sharks.

Ono has unfairly been blamed for breaking up the Beatles for far too long. It’s time to shift the criticism onto the smooth-talking accountant who slimed his way into the band and succeeded in pitting the musicians against each other. More than any other single person, Allen Klein broke up the Beatles.

“Stax Does the Beatles”

Advertisement
(Above: It may have been the holiday season, but John Lennon wasn’t pulling any punches when he put this video together. This extended cut also includes edited interviews with Lennon.) 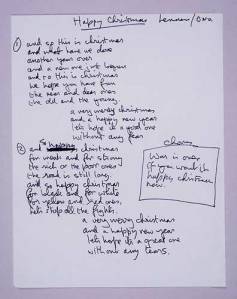 Before it was a song, “Happy Xmas (War Is Over)” was a billboard. In 1969, two years before the song was written and recorded, John Lennon and Yoko Ono proclaimed “War is Over! (If You Want It)” on signage in New York, Rome, Berlin, Tokyo and several other major cities around the world. The signs were an outgrowth of Lennon and Ono’s bed-in for peace, but the phrase stuck in Lennon’s head.

When the couple relocated to New York City in 1971, Lennon quickly feel in the company of radical ‘60s activists Jerry Rubin and Abbie Hoffman. Lennon had already gone on record against the Vietnam War at a Beatles press conference in 1966. The conflict was also a frequent topic of conversation during the bed-in. Instead of giving peace a chance, though, the United States had become even more entrenched in combat.

Inspired by his social circle and frustrated by another holiday season marked by fighting, Lennon turned his billboard slogan into a song. Lennon wrote the song over two nights in a New York City hotel room and recorded it almost immediately. Despite being released less than three weeks before Christmas, the single still managed to reach the Top 40. The feat was replicated each time the single was re-released. In Lennon’s native England, the single did not appear until 1972, when it went in the Top 5. 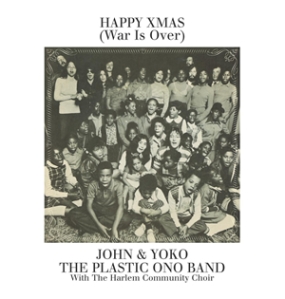 After a whispered shout-out (whisper-out?) to the pair’s children, Phil Spector’s wall of sound kicks in. The opening line – “And so this is Christmas/and what have you done?” – is both a nostalgic look back and the previous year and question of accountability. Despite having hope for the upcoming year, Lennon admits “the world is so wrong.” A chorus of children from the Harlem Community Choir echoes the words that started it all: War is over/If you want it.”

The melody is based on the folk ballad “Stewball,” a song about a British race horse. The first versions of “Stewball” date to the 18th century, but Woody Guthrie and Lead Belly put their stamp on the song in the 1940s. During the folk revival of the early ‘60s, both Peter, Paul and Mary and Joan Baez included the song in their repertoire.

Many artists, including skiffle singer Lonnie Donegan, a big influence on Lennon and most British musicians of his generation, have cover “Stewball,” but their numbers pale in comparison to the roster of those who have recorded “Happy Xmas (War Is Over).” From Andy Williams and Celine Dion to Maroon 5 and American Idol David Cook to the Moody Blues and the Polyphonic Spree, the song has been covered by nearly every conceivable artist in nearly every conceivable genre.