Skip to content
(Above: Released last summer, “Say Hey (I Love You)” is the biggest hit in Michael Franti and Spearhead’s 16-year career.)

Michael Franti’s first trip beyond the borders of the United States came when his family spent a year in Canada.

Seeing his homeland from the outside opened his eyes.

The musician has been around the world several times during his 20 years as a performer, but he has never stopped searching for new perspectives. Many of those experiences are funneled into the music he makes with the band Spearhead, which combines pop, rock, reggae, hip-hop and world influences.

“Playing music was really my first opportunity to travel,” Franti said. “Wherever I went, I would always go out and see stuff — museums, architecture, rivers, lakes, parks.”

As Franti became familiar with the larger offerings of major cities, he started seeking smaller experiences.

“The most unique experience you can have is just to have a conversation,” Franti said. “I’ve had heartfelt talks with people in parks in cities, and farmers in undeveloped countries who lay out plastic tarps to collect rainwater.”

Standing six and a half feet tall and sporting long dreadlocks, Franti rarely blends in with a crowd. He can often be spotted with a guitar slung over his shoulder, walking barefoot.

“I’ve carried my guitar to places with the most harsh conditions. I’m talking about famine, hunger, poverty,” Franti said. “But those people don’t want to sing about how hard life is. They want to dance and clap and sing along.”

The adopted son of a teacher and university professor, Franti formed his first band while attending the University of San Francisco. He has been fronting Spearhead, his third outfit, for 16 years. Although Franti’s medium has shifted from hard-core punk to hip-hop to reggae and pop, his lyrics have always retained a fervent, though upbeat, political bent.

In 2006, Franti took his politics to a new level when he toured the Middle East with his guitar and a movie camera. His goal was to capture the emotions of war-torn people on film and in song. Franti returned with 200 hours of footage that was edited down to the 86-minute documentary “I Know I’m Not Alone.” The music from the trip appeared on the album “Yell Fire!”

“These experiences helped me realize a political song is only as good as its ability to make people dance and move,” Franti said. “I started writing songs of upliftment, inspiration. A lot of songs are about conviction for life and rising above.”

Franti and Spearhead’s most successful song by far is “Say Hey (I Love You).” Despite being released nearly a year ago, the song has taken on a surprising second life. It has popped up on the television show “Weeds,” appeared on the “Valentine’s Day” movie soundtrack and peaked at No. 18 on the Billboard Top 100 chart.

“Say Hey” had just started to crest last summer when Franti’s appendix ruptured, sending him to the hospital and the band’s concert dates by the wayside.

“We had been touring for a while, and things were starting to blow up,” Franti said. “Suddenly I have a near-death experience, and I’m in the hospital. It was a healthy reminder that life is precious, and you have to value every second. There are several songs on the new album about the preciousness of life and how grateful I am to be able to play music.”

Continuing the trend of his previous two albums, Franti made his new record, “The Sound of Sunshine,” in Jamaica with producers Sly and Robbie. The legendary duo has worked with everyone from reggae giants Peter Tosh and Black Uhuru to Bob Dylan and the Rolling Stones.

“Working with Sly and Robbie is always a thrill. They are so quick to share their knowledge,” Franti said. “Every time I think a song needs a better beat, they’re the only ones I think of.”

As Spearhead worked in the studio in Jamaica, people on the street could hear the music they were making. The band could tell how well a track was working by how much it inspired the people outside. 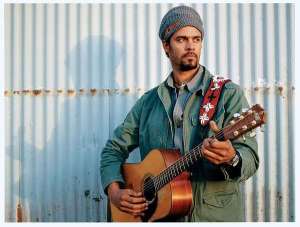 “Jamaica is an island of contradictions,” Franti said. “It’s a tropical island, but a poor country. I could see what people were going through trying to find the light. That’s really what I was trying to write about on this album.”

One of the few places Franti hasn’t taken his music to is Haiti.

“We’ve been invited, but it hasn’t worked out,” Franti said. “We have played in East Timor, however, which is in a similar economic situation. I remember thinking when we played there, if this place ever had an earthquake, everything would crumble. There was no economic infrastructure.”

John Mayer, the headlining act on Franti’s current tour, once sang he was “waiting on the world to change.” Unlike Mayer, however, Franti says he has seen progress from his actions.

“When I first got started, I wrote a lot about the prisons in California and how much money was spent there instead of in schools,” Franti said. “Then someone asked me if I’d play in a prison, so we did that. Afterward, people would come up to me and tell me what they’ve done and how much music has helped them through that time and what they want to do to get out. I’m still getting letters from guys I played for.

“That’s why I travel with my guitar,” Franti said. “I don’t want to just sing about it, I want to be directly involved.”

An early visit to Kansas City

For all of his travels, Michael Franti will always remember Kansas City. In 1992, his political rap group the Disposable Heroes of Hiphoprisy opened for U2.

Shortly after their concert at Arrowhead Stadium, Franti was hanging out with Bono and another band member when William S. Burroughs walked in. The Beat Generation legend was living in Lawrence at the time and was about to record an album with the Heroes.

“He came in carrying what looked like a bowling ball bag with him,” Franti said. “He drops it on the bed and it bounced like it was real heavy. Burroughs looks at us and goes, ‘I just thought you’d like to see my gun collection’ and pulls out a pistol with a barrel longer than my forearm.”

While Franti and Bono collected themselves, Franti’s bandmate Rono Tse picked up one of the weapons.

“Burroughs reaches over to him and says, ‘Give me a second here.’ He opens the chamber, dumps the bullets out and gives Rono the gun back,” Franti said. “Bono and I were talking about it later. We think he did it just for effect.”

Michael Franti timeline
1966 Michael Franti is born in Oakland, Calif., the son of an African-American father and an Irish-German-French mother. His mother puts him up for adoption because she is worried her family will not accept the baby. Franti is adopted by a couple with three biological children and one other adopted child.1986 As a student at the University of San Francisco, Franti forms his first band, the Beatnigs, an industrial, hard-core punk outfit.

1988 The Beatnigs release their only album. Their song “Television” becomes an underground success.

1990 Franti and his bandmate Rono Tse form the Disposable Heroes of Hiphoprisy. The group is known for its jazz-based samples and heavy political lyrics.

1992 The Heroes release their only album, “Hypocrisy Is the Greatest Luxury.” The band is invited to open for U2 on its tour, which stops at Arrowhead Stadium in October. 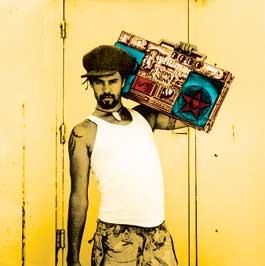 1999 Franti founds the annual Power to the Peaceful music festival in San Francisco.

2000 Franti rails against the death penalty on the concept album “Stay Human.”

2003 Spearhead responds to the post-9/11 landscape with the song “Bomb the World” and the album “Everyone Deserves Music.” Franti works with reggae musicians Sly and Robbie for the first time when he hires them to remix a track.

2006 Inspired by a trip to Israel, Baghdad, the Gaza Strip and West Bank, Franti produces the anti-war film “I Know I’m Not Alone.” The trip also influences Spearhead’s album “Yell Fire!” which is produced by Sly and Robbie. In June, the band headlines on the main stage on the final day of the Wakarusa Music Festival outside of Lawrence.

2007 Franti and Spearhead make their second appearance at the Bonnaroo Music Festival in Manchester, Tenn. The group made its Bonnaroo debut in 2003 and is scheduled to perform there this June.

2008 Spearhead releases its sixth studio album, “All Rebel Rockers.” Again produced by Sly and Robbie, it is the group’s best-selling and highest-charting record to date.

2009 “Say Hey (I Love You)” is released as a single in June. Weeks later, Franti is hospitalized after his appendix ruptures. The band is forced to cancel its headlining slot at Wanderlust and several other festivals.

2010 Michael Franti and Spearhead open for John Mayer on his Battle Studies tour.