A few random thoughts for this mid-week blog entry.

I’m looking forward to catching my first-ever Lilith Fair tomorrow night, but must admit I have several reservations. It’s never a good sign when Sarah McLachlan, the tour headliner and organizer, admits that ticket sales have been “soft.” Several dates were cancelled, and a quick glance at the temporarily unavailable TicketMaster instant seat locator showed that many of the remaining dates had vast sections of available seats. I don’t know how to fix the sour ticket industry (eliminating “convenience” fees and lowering prices spring to mind, but I’m sure it’s much more complicated), but I think Lilith hasn’t done itself any favors. Many of these problems could be fixed by paying more attention to the Lilith Fair Website.

Fans should be able to see where each artists performs without having to click on every date. Clicking an artist’s name brings up a highlighted list of her cities, but without dates. This is needlessly complex. Furthermore, the schedules for each city are missing. Eleven artists will play at Sandstone Amphitheater tomorrow night. Performances will start in the mid-afternoon. Approximate schedules should be posted weeks before each stop so fans will be able to make plans and adjust to be in place for their favorite performer. Each of these issues have easy solutions. Judging by the Website, it appears as if everyone threw in the towel long ago. These shows may be a loss, but fans still need to be cared for.

My little brother cracks me up. With very little coaching from me, he has become a huge Beatles fan. His Facebook posting the other day reminded me of something I would have written as his age. He was outraged that the “freak” Lady Gaga had covered “Imagine,” “the magnificent song by John Lennon.”

I can’t recall any Beatles covers drawing my ire, but for a brief period I grew very upset when rap producers (I’m looking at you, Diddy) were too reliant on the source material. “I’ll Be Missing You” and “Feel So Good” seemed like glorified karaoke to me. The kicker came when Jimmy Page and Tom Morello, two guitarists (read: “musicians”) I greatly respected helped Diddy rework Led Zeppelin’s “Kashmir” for “Come With Me.”

I have mellowed over time. Now when I hear Gaga’s cover of “Imagine” I’m glad she has good taste and that someone is keeping Lennon’s music alive, however the performance rates.

In another lifetime, in another era I would have been a great producer at Rhino Records. I love scouring the catalogs of artists, unearthing gems from dismissed albums or periods. Much of this ends up in multi-volume anthologies, but these treasures also work as nice garnishing in a playlist.

The other day I was working with a friend who took great delight in all the solo Pete Townshend material I had sprinkled into a Who playlist (there were Roger Daltrey and John Entwistle solo offerings as well). He thought it was hilarious that I would venture beyond “You Better You Bet,” the band’s final classic single. I think he’s missing out. “Slit Skirts” and “Give Blood” may not be the second coming of “Won’t Get Fooled Again” or “Substitute,” but they’re easily as good as anything that came after “Who By Numbers.”

This leads me to Ringo Starr. Obsessive that I am, I created anthologies for all the fallow periods in the solo Beatle catalogs – except Ringo. The Fab drummer’s 70th birthday last week caused me to reconsider this stance. So I dutifully investigated all of his albums. The critics weren’t wrong – there’s more bad than good. That said, there’s always at least one keeper on each album, and if I hadn’t been so dedicated I would have completely missed out on Ringo’s first two fantastic albums.

Ringo’s third solo album, 1973’s “Ringo” soaks up all the love but “Sentimental Journey” and “Beaucoups of Blues” are just as good, albeit for very different reasons. Both albums came out in 1970, and both clock in around 35 minutes. Both the brevity and timing work in Ringo’s favor. 1970 was both the best and worst year to be a Beatles fan. Sure the band broke up, but on the other hand fans got “Let It Be,” “McCartney,” “All Things Must Pass,” “Plastic Ono Band” and the aforementioned Ringo platters. 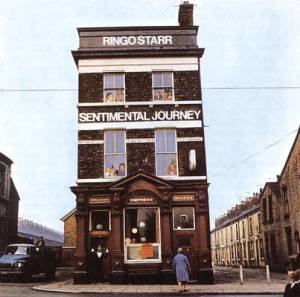 Although they hit shelves only six months apart, “Sentimental Journey” and “Beaucoups of Blues” couldn’t be more different. Both albums are genre exercises, but the big-band swing of “You Always Hurt the One You Love” is both geographically and generationally separated from the country twang of “Loser’s Lounge.” Yet Ringo’s enthusiasm and personality shines through both project, making them an infectious and irresistible listen.

Neither album will replace “Abbey Road” or “A Hard Day’s Night,” but they easily trump “Red Rose Speedway,” “Extra Texture” or “Some Time in New York City.” Better yet, they can be found easily and cheaply on vinyl. Do yourself a favor and grab ‘em next time you haunt the bins.