Skip to content
(Above: Chickenfoot live it up going “Down the Drain,” one of the highlights of their performance Tuesday night at the Uptown Theater.)

On paper, there was a potential disaster: Chickenfoot, the hard-rock supergroup that includes members of Van Halen and the Red Hot Chili Peppers, ignored several of those groups’ Top 10 hits to concentrate solely on new material at their Tuesday night concert at the Uptown Theater.

However, what sometimes comes across as forced and stiff on album, was loose and fun as former Van Halen vocalist Sammy Hagar and bass player Michael Anthony, Chili Peppers drummer Chad Smith and guitar virtuoso Joe Satriani tore through their new songs like a set of old favorites for a nearly sold-out crowd.

For the two hours they were onstage, the Uptown felt like a rock club. Throughout the night, Smith perpetually tossed drumsticks into the audience as Hagar signed autographs and slapped hands. The curtain draped across the back half of the stage pushed the band so close that Smith was able to pick out a pretty blonde in the front row and convince her to administer a spanking.

The night opened like the album, with “Avienda Revolution.” The second number, “Soap on a Rope,” featured a big greasy guitar riff that wouldn’t have been out of place in Hagar and Anthony’s old band. As Satriani reeled off one of his gravity-defying solos, he stood shoulder-to-shoulder with Anthony, smiling and bopping like the two had played together since high school.

Anthony broke out the Jack Daniels bass for barn-burning “Down the Drain.” Hagar introduced the number saying it was born out of a studio jam, but the way the group changed textures and tempos while maintaining intensity proved that this band was more than a vanity project.

Satriani rarely works with vocalists, so it was interesting to watch how he interacted with Hagar. Typically, his fingers say so much it’s difficult to get a word in edgewise, but he served the songs well, tastefully stepping back during the verses instead of just spinning his wheels until the next solo.

“Bitten by the Wolf” was the lone number during the main set that didn’t come from Chickenfoot’s self-titled album. The bluesy acoustic number was well received, but the crowd tore the roof off singing along to the next song, “Oh Yeah,” which has generated some radio airplay.

After the obligatory Hagar car song “Turnin’ Left” -– an ode to NASCAR –- the Red Rocker finally strapped on an electric guitar for the closing ballad “Future in the Past.” He reached for the six-string again, playing lap slide to introduce “Bad Motor Scooter,” a number Hagar wrote with Montrose in the ‘70s. It was the lone nod to any back catalog.

The night ended with another car song, Deep Purple’s “Highway Star,” but the band lingered onstage long after the song was over. As Smith, Anthony and Hagar reveled in the fans, Satriani filmed the moment for posterity. The fun was so infectious, everyone was reluctant to leave and break up the party.

Admittedly, it would have been nice to hear “Dreams” or “By the Way,” but why look to the past when there’s so much promise in the future?

Setlist: Avienda Revolution, Sexy Little Thing, Soap on a Rope, My Kinda Girl, Down the Drain, Bitten by the Wolf, Oh Yeah, Learning to Fall, Get It Up, Turnin’ Left, Future in the Past/encore: Bad Motor Scooter, Highway Star 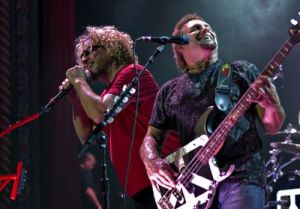