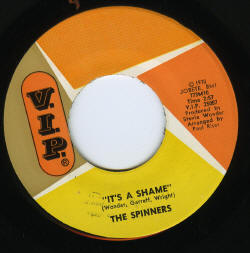 The Spinners had been absent from the charts for five years when “It’s A Shame” came out in June, 1970. In fact, the Detroit quintet had only two hits in their 10-year history up till that point.

By 1970, the Spinners were considered collateral damage from the Tri-Phi takeover, serving mostly as road managers and chaperones for more successful groups. Their hunger for a hit was a natural match for another Motown artist’s desire to spread his wings.

When Gaye wanted to show his independence, he wrote and produced two hits for the Originals. Now Stevie Wonder looked at the Spinners and wanted to do the same.

“It’s a Shame” was written and produced by the same team responsible for Wonder’s most recent hit “Signed, Sealed and Delivered.” Wonder’s musical and romantic relationship with Syreeta Wright continued to blossom and Lee Garrett once again contributed to the composition.

The song opens with a hypnotic guitar hook, but it’s the Spinners’ harmony vocals that cement the number as a soul classic. The lyrics speak of heartbreak, but the delivery is effortless and graceful.

The performance was so stellar that few artists have attempted to cover “It’s a Shame.” The song instead lives on as a sample, appearing in songs by R. Kelly, Sounds of Blackness, Lethal Bizzile and Monie Love.