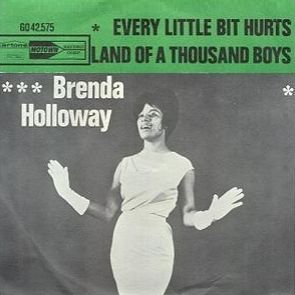 Brenda Holloway – “Every Little Bit Hurts,” Pop #11
Motown may have been “the sound of young America,” but this song was clearly aiming for an older audience. Lee Cobb’s writing is obviously influenced by the Burt Bacharach/Hal David team, but Brenda Holloway’s pristine, nuanced delivery elevates the song above imitator status. Her restraint is the key – Holloway trusts the melody and structure will carry the song further than her lungs. She was right. Although the style is closer to supper club than street party, Holloway and Cobb inspired a legion of artists to take it on.

The Spencer Davis Group, fronted by a young Steve Winwood, had a hit with it in 1965. A year later, the Small Faces tried their hand on it. Funkmaster George Clinton turned the song into a duet in 1972 when he performed it with Diane Brooks. Alicia Keys released a more faithful version on her 2006 live album “Unplugged.” Proving once again there were few musical stones they wouldn’t turn over, The Clash recorded a cover in the early ‘80s. Fellow English punkers The Jam also cut a version about the same time. — by Joel Francis