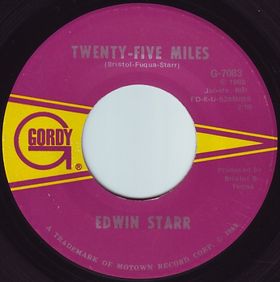 If the horn arrangement on “Twenty-Five Miles” sounds like something out of the Stax studio, that’s because it is. Motown songwriters Harvey Fuqua and Johnny Bristol based their number on the obscure Wilson Pickett song “32 Miles Out of Waycross (Mojo Mama)” written by Bert Berns and Jerry Wexler and recorded in 1967.

It’s little surprise Fuqua and Bristol turned to a Pickett number when looking for material for Edwin Starr. Like Pickett, Starr was a strong baritone who sang from the throat. And like fellow Motown family member Levi Stubbs of the Four Tops, Starr’s voice was seeped in the Southern style.

Unlike, Stubbs, however, Starr didn’t have a string of hits under his belt, which made him a bit of an outcast at the label. A Detroit native who somehow escaped Berry Gordy’s eagle eye for talent, Starr’s biggest hit. to date was the 1965 song “Agent Double ‘O’ Soul” recorded on the Ric-Tic label. Three years later, when Motown purchased Ric-Tick in 1968, Starr joined the Hitsville stable.

“Twenty-Five Miles” opens with Benny Benjamin’s athletic drumming and he stays front and center as the funky scoutmaster that keeps Starr’s (and everyone on the dance floor) feet relentlessly moving. The bass line echoes a horn line that has become a staple of marching and pep bands across the country. The listener never learns what happens when Starr reaches his destination, but the energetic vocals definitely prove that getting there is half the fun.

Although “25 Miles” was a Top 10 hit, it often been overlooked when acts mine the Motown catalog. For nearly 20 years, Charles Wright and the Watts 103rd Street Rhythm Band were the only group to cover the song. Their version was released several months after Starr’s as an album track on “In the Jungle, Babe.” In 1989, UK dance outfit the Cookie Crew sampled “25 Miles” on their hit “Got to Keep On.” Australian boy band Human Nature covered “25 Miles” on their 2005 release “Reach Out: The Motown Album.”