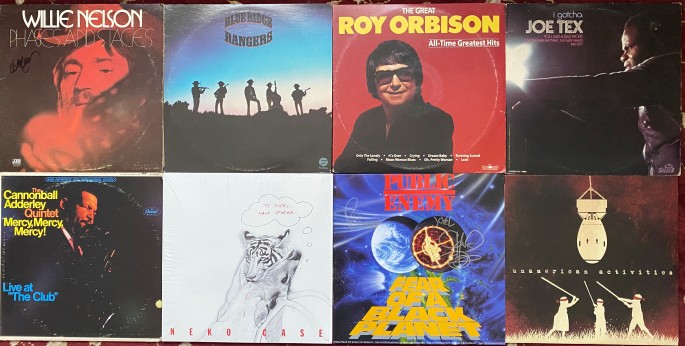 Joe Tex – I Gotcha (1972) Like a lot of people, I was introduced to Joe Tex through the Reservoir Dogs soundtrack. Like most of Quentin Tarantino’s musical moments, “I Gotcha” was placed perfectly in the film, when the guys bring the captive cop back to the warehouse. I can’t remember where or when I first encountered “You Said a Bad Word,” but that song captured the same sexual menace, braggadocio and funk as “I Gotcha.” If you liked one, you would surely like the other. Lucky for me, those songs kick off each side of this album. “Give the Baby Anything That Baby Wants” was another single released from this album in the same vein as “I Gotcha” and “Bad Word.” The ballads on here aren’t bad, but when I spin this record I want to strut.

Cannonball Adderly – Mercy, Mercy, Mercy! Live at The Club (1966) If you don’t recognize the name Cannonball Adderly, you may know him as the saxophone player who isn’t John Coltrane on Miles Davis’ Kind of Blue. This album is a world away from Davis’ celebrated release, but it is fantastic in its own right. The title song actually crossed over on the pop charts and it’s easy to see why. It kind of rolls in from nowhere before building into a big gospel-fueled chorus. Composer Joe Zawinul takes a solo on the electric piano as the melody percolates until the band churns back into that big chorus. It’s the kind of song that could go on forever. To my ears, it also points the way to the jazz television themes of the 1970s and ‘80s, like Bob James’ “Angela,” used for Taxi and Mike Post’s theme for “Hill Street Blues.” If Zawinul’s name sounds familiar, he played on Davis’ fusion landmarks “In a Silent Way” and “Bitches Brew” before founding Weather Report with Wayne Shorter. Oh, and the rest of this live album is great, too.

Neko Case – The Tigers Have Spoken (2004) Technically this is a live album, but there’s no crowd noise or stage banter (until a hidden track at the end), so you could be forgiven for thinking this is a studio release. Either way, hearing Neko Case perform songs by Buffy Saint Marie and Loretta Lynn is a treat. Gospel music isn’t the first thing that comes to mind when I think of Case, but she and her top-shelf band do right by “This Little Light.” My hometown even gets a nod on “The Train from Kansas City.” All in all, The Tigers Have Spoken isn’t as essential or immediate as the many studio albums containing her original compositions, but it is a great homage to some of the people who inspired her.

Red Kate – Unamerican Activities (2016) Nearly every December for the past several years the RecordBar has hosted a great tribute to the late Clash singer and guitarist Joe Strummer. I always make it a point to attend because it is an opportunity to hear songs by my favorite band performed live. Red Kate were the closing performers in 2018 and blew me away with their intensity. Afterward, I struck up a conversation with lead singer L. Ron Drunkard – shout-out to that amazing stage name – who is exactly who you’d expect him to be: A guy who fell in love with punk music as a kid and has been playing in bands for most of his life while holding down a day job to pay the bills.

The music on Unamerican Activities reflects that proletariat, we’re-all-in-this-together perspective. These songs hit hard and punch back at the ruling class. No one’s working for the clampdown in these quarters.

Roy Orbison – All-Time Greatest Hits (1986) Every music collection needs so Roy Orbison, so this was one of the earliest albums I bought. A closer look reveals this aren’t the original recordings of Orbison’s best-known songs, but remakes done in 1986. The big clues are that the musician credits are the same for all tracks and there aren’t any licensing arrangements for the singles that were initially issued across several labels. The good news is that the producers didn’t try to update the Orbison sound. There are no gated drums or synthesizers and Orbison still hits all the right notes on “Cryin’” so this collection still works for me.

Public Enemy – Fear of a Black Planet (1990) Despite its provocative title, Public Enemy’s third album isn’t as incendiary as the first two. This isn’t to say Chuck D is pulling any punches. “Burned Hollywood Burned” torches the movie industry for black stereotypes and the lack of black actors a generation before #OscarsSoWhite. “Fight the Power” doesn’t attempt to hide its manifesto. Deeper into this dense album “Pollywannacracka” discusses interracial couples (before Jungle Fever, I might add). Flava Flav’s comic relief comes in the form of “911 is a Joke.” Ha ha.

In a way, Black Planet is a distillation of the first two albums in manner more palatable to mainstream tastes. It’s PE’s best-selling album, but also the last album where nothing feels forced and it doesn’t seem like they are trying too hard. Looking at current headlines and the spike in hate crimes since 2017, it seems the concept of a black planet is still a very present fear in society today. Welcome to the terrordome.

John Fogerty – Blue Ridge Rangers (1973) John Fogerty was snake-bitten and gun-shy after the demise of Creedence Clearwater Revival. His label owner swindled him out of songwriting royalties and his brother Tom had sided with the label before bitterly leaving CCR. This is probably why John Fogerty’s name is hard to find anywhere on this debut solo album. The Blue Ridge Rangers are actually Fogerty playing all the instruments. He does a good job sounding like Nashville session players during this romp through a dozen country standards. My favorites are the gospel songs “Working on a Building” and “Somewhere Listening,” each featuring a choir of Fogertys on backing vocals. The performance of Hank Williams’ “Jambalaya” is as close as the album gets to CCR territory.

Willie Nelson – Phases and Stages (1974) Finding someone who doesn’t like Willie Nelson is like encountering someone who hates rainbows, ice cream and puppies. I mean, I guess mathematically that person has to exist, but you never expect (or hope) to encounter him or her. I’ll never forget a former co-worker’s diatribe against Nelson, but I took some satisfaction in knowing the disdain was for political, rather than musical reasons.

Phases and Stages is the album that immediately preceded Nelson’s breakthrough, Red-Headed Stranger and also the second of what would be three consecutive concept albums. I’d say that period represents peak Nelson, but the truth is that Nelson turns out so many albums and so many of them are solid that any valleys are likely to be followed by a couple more peaks. If you love country music, rainbows, ice cream and puppies, you should have this album. If you don’t like any of these, I feel sorry for you.