Sonic Youth – Washing Machine (1995) On the surface, Washing Machine appears to be just another release by avant rockers Sonic Youth. Released nine albums into their three-decade career, the band doesn’t have much to prove by this point but they certainly aren’t coasting through this set. All three of the band’s songwriters are in peak form. The album opens and closes Kim Gordon, Thurston Moore and Lee Ranaldo taking lead vocals on their respective compositions. Moore’s closing cut, “The Diamond See” is a fascinating 20-minute track that shows the quartet stretching out, yet never repeating themselves. It’s the longest they let a mood percolate on a studio album. (An even longer 25- minute version was released on The Destroyed Room rarities collection.) Overall, Washing Machine points to the more mature direction Sonic Youth would take in the early ‘00s.

One Day As a Lion – self-titled (2008) Well, this is it. The 20 minutes on this EP comprise most substantial release by Zack de la Rocha since the end of Rage Against the Machine at the end of the millennium. It boggles the mind how someone so politically aggressive during the Clinton administration could be so quiet during the Dubya and current administrations. If anything, you’d think de la Rocha would be out stumping for Bernie Sanders.

Brief as it is, the music here meets all expectations. It’s loud, combative and better than either of Rage axeman Tom Morello’s acoustic Nightwatchman full-lengths.

Andrew Hill – Point of Departure (1964) I discovered Andrew Hill about six months before he died. Even though I didn’t have a lot of history with his art, I was still deeply saddened by his loss. Selfishly, I had hoped that I would be able to see him perform at some point. I was also disappointed that such a monumental talent hadn’t achieved the renown and accolades Hill deserved.

It can be easy for pianists to get lost in the background when playing in larger groups, especially with reed-player Eric Dolphy in the mix. Hill’ steady hand is ever-present across this album, guiding every song and creating the spaces for Dolphy and saxman Joe Henderson’s solos (and delivering plenty of his own as well). “Dedication,” the final piece, is as beautiful a piece of music as you will ever hear.

Elvis Costello and the Attractions – Get Happy!! (1980) Elvis Costello has released so many great albums across so many styles it is hard to pin down a favorite. That said, of the four classics in his initial “angry young man” phase, this might be my pick as the best. Costello skitters across all forms of soul music in these 20 songs, moving quickly from Motown to Northern and blue-eyed soul. Ballads and Southern soul are also given their due. What reads like a dull, academic genre exercise on paper is a hoot to hear because of the Attractions manic energy – particularly Steve Nieve’s hopping organ – and Costello’s lyrics, that slash like a switchblade in an alley fight. You don’t realize how quickly they cut until they’ve moved on to the next victim. Best to keep dancing and sort it all out later.

Robbie Robertson – Storyville (1991) Anyone disappointed that Robbie Robertson’s debut album bore few traces of his time with The Band will find more to like with this sophomore effort. Although the performances are far more restrained and the production more polished than anything with his old group, it’s not hard to imagine Rick Danko singing on “Night Parade” (although he does contribute backing vocals on the gorgeous ballad “Hold Back the Dawn”). Taken on its own terms, this is still a very satisfying album. Neil Young stops by to help with “Soap Box Preacher” and the Neville Brothers appear on “Shake This Town,” recorded with Rebirth Brass Band, and “What About Now.” The spirit of New Orleans, where Storyville was made, also appears on “Go Back to Your Woods.” In a way, Storyville makes a nice companion piece to the Neville Brothers’ Yellow Moon, released the year before with Daniel Lanois, the man behind the boards for Robertson’s debut.

Louis Armstrong and his Hot Five – The Golden Era Series, Vol. 1 (compilation) It blows my mind that these recordings are approaching their centennial. These are among Armstrong’s first sessions as a bandleader. His solos here went a long way establish jazz as an improvisational genre. Satchmo doesn’t sing on every cut, but when he does it is always memorable. The dozen cuts here are so celebrated and influential it is impossible to have a favorite, but I’ll share some of the titles to whet the appetites of the uninitiated: “Heebie Jeebies,” “Struttin’ with some Barbeque,” “Gut Bucket Blues,” “Hotter than That.” Just reading those titles, how can you not want to dive in?

The songs here appeared roughly the same time as George Gershwin’s compositions and significantly predate Aaron Copeland’s most celebrated pieces. This is the sound of America growing up and forcing its way on the world’s artistic stage well before it became impossible to ignore as a superpower.

Ben Folds – Supersunnyspeedgraphic, the LP (compilation) The first three sides of this two-record collection encompass highlights from the digital-only mini-albums Folds released in the early 2000s. It’s fun to hear Folds give the Cure and the Darkness his own demented spin. His potty-mouthed cover of Dr. Dre and Snoop Doggy Dogg’s “Bitches Ain’t Shit” is funny the first few times, but gradually wears out its welcome. In his memoir A Dream About Lightning Bugs, Folds recounts a stint opening for John Mayer where he would perform this song several times in a row relishing the jeers. I can relate to how that audience must have felt. Original songs including “Adelaide,” “Songs of Love” and “Still” more than make up for Folds’ West Coast rap mishap. The fourth side of this set is a real treat, too. We get a half-dozen cuts from the Over the Hedge soundtrack, including a great cover of The Clash’s “Lost in the Supermarket” and an alternate version of “Rockin’ the Suburbs” with an epic William Shatner rant based on real events.

The Supremes – At their Best (compilation) Conventional wisdom holds that the Supremes were over once Diana Ross left. True, Ross had much greater success as a solo artist than the Supremes did without her, but they were still a potent force. The group had six Top 40 hits in the post-Ross era and several more hits on the R&B charts. Many of those tracks are included on this 10-track collection, which spans 1970 to 1976. “Stoned Love” and “Up the Ladder to the Roof” are as good as anything the Supremes released in their prime years. “I’m Going to Let My Heart Do the Walking” and “You’re My Driving Wheel” update the group’s sound with elements of funk and disco. The Supremes were always a better singles act than album artists and this anthology is a fitting encapsulation and the final chapter. 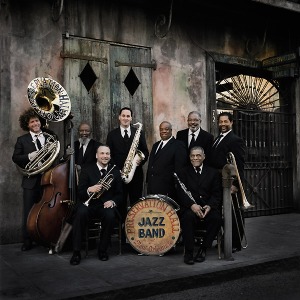 A recent trip to New Orleans provided me the opportunity to bask in several facets of jazz. When possible, I took video footage to preserve a few choice moments.

My first night in the Big Easy, I stopped in at the legendary Preservation Hall. With its intentionally rough-hewn interior, stepping inside was like visiting a living history farm. The Hall has been a tourist destination for half a century, but don’t let that keep you away. Sure, this may be the only live jazz most people will hear for the rest of the year, but that doesn’t mean it’s not worth experiencing. The setlist stuck to pre-war standards, but they were delivered with plenty of fun and energy. The venue’s name is apt. The arrangements aren’t groundbreaking, but the Preservation Hall band is keeping a sound alive that may otherwise have been forgotten. Unfortunately, no audio or video is allowed.

Located on Bourbon Street a few blocks from Preservation Hall (and near Skully’s, a great record store), Fritzel’s European Jazz Pub draws on the same era, but from a different perspective. If Preservation Hall celebrates the Sidney Bechet of New Orleans, Fritzel’s commemorates the European Bechet. In fact, thanks to an audience request, the band leader treated the crowd to a great version of Bechet’s “Petite Fleur.” The 1959 hit isn’t the easiest song to master, but the clarinet player blew effortlessly. I was able to take a little video to capture the atmosphere in Fritzel’s.

After two days in the French Quarter, I had had enough. The tourist trap may be fine for less-seasoned travelers, but I quickly discovered Frenchmen Street was where the locals partied, The corridor featured many fine clubs within the space of a few blocks, including Snug Harbor, the Apple Barrel and my destination for the next two nights, the Blue Nile and d.b.a.

Kermit Ruffins has enough of a following that he can play nearly every night of the week. Locals now have to share Ruffins with tourists (like me) thanks to his appearances on “Treme.” The two-hour set was filled with standards like “What a Wonderful World” and “On the Sunny Side of the Street,” which Ruffins managed to freshen up without offending purists. An entertainer and trumpet player from the Satchmo school, Ruffins was determined to make everyone in room smile and get on their feet. The best moment arrived after an intermission, when the house PA’s version of Tupac’s “I Ain’t Mad At Ya” faded into a live version, with Ruffin’s delivering a blistering post-Katrina rhyme. Here is some footage I shot of Ruffin infusing the Black Eyed Peas with some much-needed zydeco.

On my final night in NOLA, I returned to Frenchmen Street to witness Rebirth Brass Band at d.b.a. There are a myriad of great brass bands in the Crescent City, but Rebirth may be the only one that can boast a parental advisory rating in its catalog. The eight-piece unit mixes funk and hip hop into the traditional brass band sound. The stifling heat in the small room couldn’t keep the crowd from dancing, and the band seemed to be having the most fun. Here’s a bit of Rebirth’s tribute to another native son, Fats Domino.

On the Streets of Philadelphia

A tour of KC’s Women in Jazz