The titles are almost identical, but the songs couldn’t be further apart. The pair arrived back-to-back about the one-hour mark of soul singer Anthony Hamilton’s Friday night concert at the Midland Theater.

“Prayin’ for You” was a jubilant gospel jam that found Hamilton singing and dancing in the middle of the crowd and featured a nice blues slide-guitar solo. A quick wardrobe change brought the mournful, contemplative “Pray for Me.”

The contrast displayed Hamilton’s chops as a songwriter, vocal abilities and his six-piece band’s versatility. The numbers also managed to capture the crowd’s complete attention in two very different ways. Several moments competed with “Prayin’ for You” as the night’s biggest party, but none was more intimate than “Pray for Me.” 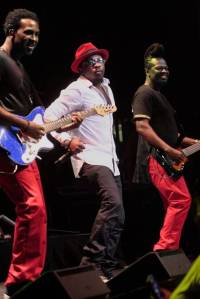 The band arrived onstage like it had been shot from a cannon. The three backing vocalists also served as hype men, lathering the crowd for Hamilton’s appearance and opening number “Sucka For You.” A bit of Run-DMC’s “It’s Like That” let everyone know the historic theater was hosting a block party tonight. A well-placed piece of “No Diggity” at the end of “Woo” cemented the give-and-take between stage and crowd. Hamilton’s dancing during that number produced many squeals of delight.

Most of the performances extended well past their album length. Hamilton let the band stretch out, incorporating bits of Philly soul, Stevie Wonder, Prince Earth, Wind and Fire and hip hop into his original material. He also wasn’t shy about sharing his band. Everyone in the ensemble got a moment to shine.

One of the two keyboard players dropped some nice “Talking Book”-era talkbox on “Woo.” The bass player sported an impressive Mohawk and prowled the stage like he was the headliner. His bass and the bass drum were the focus of the mix. At times they drowned out the keyboards and guitar and threatened to swallow the vocals as well, but the mix improved as the show progressed.

Hamilton closed the 90-minute set with his breakthrough hit “Charlene,” which segued into the Dells’ “A Heart is a House of Love.” By the time Hamilton started introducing his band people were heading to the exits like someone pulled the fire alarm. They were either hurrying for the announced photo op with Hamilton in the lobby or eager to take the evening’s energy to another environment.