Skip to content
(Above: “New Dawn Fades” for Peter Hook and the Light.)

“This is the way,” Peter Hook sang during the opening song. “Step inside.”

The smallest crowd of the night at Middle of the Map’s outdoor stage was all too eager to follow.

Hook is a founding member of the influential post-punk band Joy Division. The British group famously broke up on the eve of their first U.S. tour. The surviving members were well into their second life as New Order by the time they finally reached America. 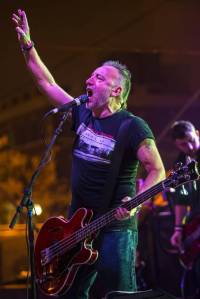 As the bass player in both bands, Hook’s new group finally gives fans – many of whom weren’t alive during Joy Division’s late ’70s run – a chance to finally hear the beloved songs performed by a founding member.

The execution was as straightforward as it was magical: Both of Joy Division’s studio albums in their original order and arrangements, with a couple non-album songs at the end. The experience mimicked what fans have enjoyed for years at home, only exponentially better.

“Closer,” the second of Joy Division’s two albums, opened the night. After a brief break, the band returned to perform “Unknown Pleasures.” The combination of “New Dawn Fades” into “She’s Lost Control” – separated by a side break on the original album – generated one of the strongest one-two punches of the 90-minute set. By the end of “Love Will Tear Us Apart,” Hook had his shirt off, tearing around the stage with a maniacal smile, acting like it was the first time he had performed the band’s best-known number.

A combination of cool temperature and constant mist of rain actually improved the atmosphere. Joy Division’s music is many things – groundbreaking, intense, visceral – but it is not made for a sunny afternoon.

Hook was ably assisted by the five-piece Light, which included his son, Jack Bates, handling many of his dad’s signature basslines. The remaining three members are veterans of Monaco, another of Hook’s bands.

Although the audience was intimately familiar with the material, there wasn’t a lot of singing along. Instead there were a lot of and spontaneous hugs and high fives when favorite songs like “Isolation” or “She’s Lost Control” started. There were also lots of closed eyes as fans let the music and experience wash over them.

Review: TV on the Radio

(Above: Mission of Burma play a rare show in Kansas City as part of the Middle of the Map Festival on April 6, 2012.)

Mission of Burma’s invitation to this year’s Middle of the Map festival mirrors last year’s inaugural invite to Daniel Johnston. Both artists exist miles away from the mainstream, have dedicated cult followings and usually skip Kansas City on their infrequent tour itineraries.

The post-punk quartet held the last slot at the Record Bar on Friday night. Anticipation was so high the venue was one-in, one-out more than an hour before Burma was scheduled to go on. Halfway through the band’s 75-minute set, however, about half the room had cleared out. 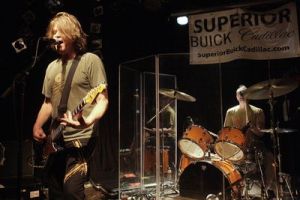 The two biggest contributing factors to this exodus were likely the late start time – the band didn’t go on until after midnight – and the emphasis on new material slated for release on the group’s fifth studio album this summer. Fans that stayed, however, were rewarded with not only a preview of what looks to be a strong continuation of a critically acclaimed catalog, but many of the early songs everyone came to hear.

Early number “Donna Sumeria” captured the essence of Burma. As drummer Peter Prescott lays down a deceptive disco beat, guitarist Roger Miller’s fingers fumble over the frets, creating a snakey melody. The lyrics invoke the Sumerian goddess of love and turn the dance goddess Donna Summer into an abstract plea for peace in the Middle East. Miller’s brief turn on the flugelhorn at the top seems like an abstract experiment, until soundman/manipulator Bob Weston reinterprets the horn back into the mix later in the song.

All of this may seem more fussy than anything the Ramones or Sex Pistols had in mind, but the core of Burma is still very much noisy, rebellious punk music. During their original incarnation from 1979 to 1983, the band managed a handful of singles, an EP and one full-length record. Since reuniting in 2002, they have nearly quadrupled that output. Although Friday’s set tipped heavy toward the new, all facets of the band were on strong display.

After previewing “Dust Devil,” the band’s newest single, they paired the 2006 track “Let Yourself Go” with their anthem “That’s When I Reach for My Revolver,” which had the crowd chanting along. Encores of “This is Not a Photograph” and “Academy Fight Song” kept the energy high.

The lead-up to Mission of Burma started six hours earlier at the Record Bar with Deadringers. Thee Water Moccasins and Life and Times did a great job setting the table for Burma, proving that the local music scene can stand neck-in-neck with that in any other town. Thee Water Moccasins recalled a more avant Yo La Tengo at times. The unabashedly poppy “No Control” provided the best moment from their 45-minute set. The Life and Times were propelled by the frantic drumming by Chris Metcalf. Both bands seemed to be as excited to be in the house with Mission of Burma as everyone in the audience.

The Man in (Frank) Black

(Above: John Lydon made his first post-Sex Pistols statement with “Public Image.” “Rise” is one of PiL’s most accessible tunes. Here the reunited band performs them at the 2010 Coachella music festival.)

There was nothing rotten about the performance John Lydon and Public Image Ltd. delivered Monday night at the Midland Theater. Faced with a miniscule crowd in a minor market on a weeknight, Lydon and the band could have phoned in their performance and few would have known. The four-piece band held nothing back during the high-energy, two hour show.

Public Image Ltd., or PiL, is the band Lydon formed after the Sex Pistols imploded. Although the band carried on for 15 years, its catalog can be broken down into two distinct eras. The first three albums were a conscious deconstruction of the Pistols mythology, filled with long, heavy, experimental pieces. Later work boiled down to Lydon solo projects under the PiL name produced with a rotating cast of musicians (including, incredibly, Steve Vai).

The reconstituted PiL, back together for the first time since disbanding in 1992, drew equally from both eras, and tossed in a couple numbers from Lydon’s 1997 solo release for good measure. Older numbers, like the magnificent “Poptones,” the epic “Albatross” or “Chant” were studies in texture and ambience. As the rhythm section of Bruce Smith on drums and new member Scott Firth on bass anchored the songs, guitarist Lu Edmonds welded huge blocks of sound which Lydon penetrated effortlessly with his shrill voice.

The backing trio clearly enjoyed having the space to stretch out and play with different sounds. Firth and Edmonds sparred on “Flowers of Romance” before Edmonds delivered his first solo of the night on an electric banjo. Firth switched to upright electric bass for several numbers which added extra punch to Smith’s cadences.

Although Lydon was about the same age as his gray-haired compatriots he appeared decades younger. His head was shaved, save long, blonde spikes on top that looked like a mischievous crown. After removing a red vest early in the night, Lydon was clad entirely in black. He kept a lyric book on a music stand near his mic and although he rarely looked at them during a number, he dutifully turned the page after each song. When Lydon was really feeling the music, he would hop up and down or do a robo-monster march, a manic expression plastered on his face.

While the older material was dark and amorphous, the newer songs were bright, poppy and quite danceable. The set opened with PiL’s biggest number, “This Is Not a Love Song.” Later, “Sun” was delivered via acoustic guitar and mouth organ. As Lydon led the crowd in sing-along, the arrangement almost had a klezmer feel. “Disappointed” got the biggest reaction during the main set and had everyone near the stage bouncing. Lydon later joked about the song’s message of forgiveness didn’t quite stand with the cynicism of his other tunes.

During his four decades in the spotlight, Lydon has cultivated a reputation for acerbically speaking his mind, and he didn’t disappoint onstage Monday. “Warrior” contained a political diatribe and a few not-so-kind words for Sarah Palin. Lydon introduced “Religion” as “a song that is 30 years old and as accurate as ever.” He then made a few comments about the Pope that won’t be earning him a Vatican invite any time soon.

The night ended with “Public Image,” the song that most resembles Lydon’s former band, and the upbeat “Rise,” which contains an interpretation of the Irish blessing “may the road rise to meet you.” “Open Up,” Lydon’s collaboration with the techno duo Leftfield, closed the night. As the crowd danced to the heavy bed of looped synthesizers, Lydon’s voice panned and swirled around the room.

As the band waved good night, the punk provocateur let his guard drop with a fleeting moment of sincerity when thanked everyone from the bottom of his heart for coming out. The tiny crowd comfortably filled the first two tiers on the floor, but the third was sparse and the fourth was empty.There were a few dozen people sitting on chairs in the back, but the entire audience could have probably crammed into the Beaumont Club. That venue may have been more size-appropriate, but it wouldn’t have been much fun. PiL had no problem filling the vast Midland, and Lydon’s outsized persona needed – and deserved – a bigger stage.

Review: Carbon/Silicon at the Record Bar

Ever Fallen For The Buzzcocks?