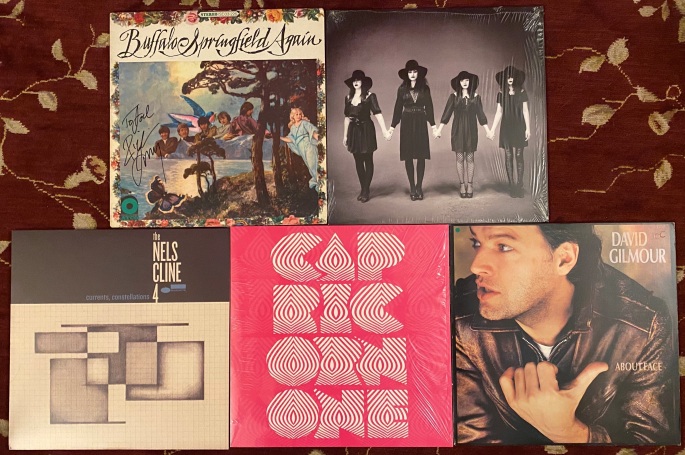 David Gilmour – About Face (1984) Simply put, About Face is not only David Gilmour’s finest solo album, but superior to Pink Floyd’s Momentary Lapse of Reason and The Division Bell as well. “Murder” is Gilmour’s response to the assassination of John Lennon. It starts as quiet acoustic number before exploding in anger against Steve Winwood’s expansive organ playing. I have no idea what “Cruise” is about, but it’s an extremely catchy acoustic number. I’ll admit to be taken aback the first time I heard R&B horns on “Blue Light,” something Pink Floyd never explored, but they have grown on me. Pete Townshend wrote the lyrics for two numbers here. These compositions fit will with what Townshend was doing on his White City album, which I discussed way back on Day 4. Check out the live album Brixton Academy in 1985 featuring both Townshend and Gilmour for another stellar example of their synergy during this time. “You Know I’m Right” is about Roger Waters, with a title (and lyrics) shutting the door on any reconciliation. Gilmour and the Floyd (sans Waters) would be back in a couple years, but About Face makes a strong case that this was the (albeit less commercial) path Gilmour should have considered instead.

The Nels Cline 4 – Currents, Constellations (2018) Playing this album is a good way to find out who your true friends are. While some will hear obnoxious jazz guitar noodling (with two guitarists, no less), others will hear sublime fretboard interplay. If you do happen upon someone who also appreciates this music, buy this person a drink or ask them to marry you, depending on his or her gender and your preference.

Ed Ackerson – Capricorn One (2019) I must confess I had never heard of Ed Ackerson before buying a ticket to his memorial concert last February. Circumstances aligned in my favor: a free evening, a solid lineup, a reasonable ticket price and an opportunity to finally see a show at the famed First Avenue. For a while I felt like an interloper, but after exiting with an armload of vinyl and all the $1 CDs I could get, I now count myself converted.

Capricorn One was Ackerson’s last album before succumbing to pancreatic cancer last October. It’s a Syd Barrett-influenced slab of soaring guitars as wonderfully atmospheric as its sci fi-inspired title implies. Ackerson wrote all the songs, played all the instruments and produced all the tracks. His final musical vision is a great ride.

The Black Belles – self-titled (2011) The self-titled debut by this garage rock quartet is unfortunately their only release. Produced by Jack White for his Third Man Records, it’s hard to tell where the producer stops and the band ends, but if you like White’s raw aesthetic that’s not a bad thing. According to the band the writing and recording came together pretty quickly. They did several high-profile shows during their brief time together, including backing Stephen Colbert on the Colbert Report and playing on his “Charlene” single. They also performed at the Devil’s Night Halloween concert in 2012. My favorite songs here include the appropriately titled “Honky Tonk Horror,” the moody “Not Tonight” and the very Jack White “In a Cage” but the entire album is good enough to make me wish there was at least another volume. Main songwriter, guitarist and vocalist Olivia Jean has subsequently released two solo albums with White and Third Man.

Buffalo Springfield – Again (1967) Neil Young jumps to the fore on Buffalo Springfield’s second album, and it’s easy to see why. His three compositions – album opener “Mr. Soul,” “Expecting to Fly” and closing cut “Broken Arrow” – are all classics in his expansive songbook. But the other songs here are no slouches either. Stephen Still’s banjo-driven “Bluebird” is a lovely song. Later, the harmony vocals on his song “Rock and Roll Woman” foreshadow the coming of Crosby, Stills and Nash. Richie Furay chips in a couple solid compositions as well. The unique horn arrangement on “Good Time Boy” definitely makes it stand out on the album. Buffalo Springfield collapsed under their own weight the following year. Again ranks as the group’s finest release during their short tenure.