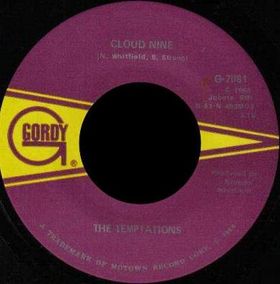 When the Temptations kicked David Ruffin out of the group in 1968, they cleaned house. Free of their troubled lead singer and his drug dependence and egocentric demands to rebill the quintet “David Ruffin and the Temptations,” founding member Otis Williams decided the psychedelic stylings of Sly and the Family Stone were the sound of the future. Although producer Norman Whitfield was reluctant to change the band’s sound with something “that ain’t nothing but a little passing fancy,” he eventually relented.

The wah guitar and flat cymbal sound that opens the song was completely unlike anything Motown had issued before. Instead of featuring one vocalist, the number finds all five Temptations passing the lead around. Williams and Whitfield’s early interest in Sly and the Family Stone is betrayed by the arrangement, which mirrors the San Francisco group’s No. 8 hit, “Dance to the Music.”

The lyrics also hit on what would become another touchstone of the post-Ruffin Temptations. The socially conscious themes of poverty, abuse and danger in the urban core would be repeated in the hits “Ball of Confusion,” “Run Away Child, Running Wild” and several other album tracks.

Williams has denied that the songs glorifies drugs as an escape to the world’s problems. For him, the key line is when Eddie Kendricks explains that cloud nine is “a world of love and harmony.”

“Cloud 9” brought Motown its first Grammy for Best Rhythm & Blues Group Performance, Vocal or Instrumental. The new category was just in its third year and had previously been awarded to Ramsey Lewis and Sam and Dave. The song paved the way for later psychedelic hits “Runaway Child, Running Wild,” “Psychedelic Shack.” These songs placed the Temptations on the vanguard of soul music and helped clear the way for Funkadelic, Earth Wind and Fire and the funk movement of the 1970s.

“Cloud 9” was run through the Motown stable and covered by Marvin Gaye, Gladys Knight and Edwin Starr. Meshell Ndgeocello performed the song live in the excellent Funk Brothers tribute/documentary “Standing in the Shadows of Motown.” The song has also been covered by reggae artist Carl Dawkins, Latin musician Mongo Santamaria and Rod Stewart.