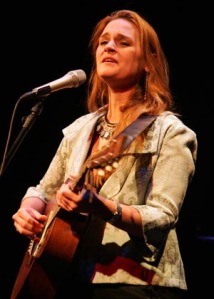 Before playing the final song of the night, Madeline Peyroux told how “Somethin’ Grand” was written around 4 in the morning, when the trucks on the nearby highway finally stopped buzzing past her Brooklyn apartment.

Most of the music Peyroux played for a sold-out edition of Cypress Avenue Live at the Folly Theater on Friday night fit that contemplative, midnight mood.The atmosphere was struck with the first song, “Dance Me to the End of Love.” Darren Beckett’s gently brushed drums and Barak Mori’s subtle and sometimes sweeping bass lines created a bed for music that blurred the lines between jazz, folk and pop.

“Don’t Wait Too Long,” the third number up, was a showcase for the other two members of Peyroux’s band. Jon Herrington’s guitar had a warm, fluid tone. Larry Goldings spent the night switching between piano, organ and keyboards. His earthy, gospel organ was the backbone of several numbers. Peyroux’s smoky voice and phrasing, which often recalled Billie Holiday, was the evening’s stand-out instrument, though.

Peyroux established her career by covering the masters and she got a couple heavyweights out early. Leonard Cohen’s “River of Tears” was followed by Bob Dylan’s “You’re Gonna Make Me Lonesome When You Go.” On that song, Peyroux crawled inside the lyric “I could stay with you forever/and never realize the time” and delivered a spectacular performance as comfortable as a Sunday afternoon nap with a lover.

Halfway through the set, Peyroux recreated her days busking on the streets of Paris as her band huddled around her playing on a box, upright bass, mandolin and blow-organ. For the only time that night, Peyroux’s acoustic guitar lead the band as she sang “La Javanaise” and “Don’t Cry Baby.” If she performed half as good on the streets as she did in the Folly, Peyroux likely found her cap filled with coins in no time.

Between songs, Peyroux chatted with the audience, playfully pointing out the lyric in Dylan’s song refers to the French poet Arthur “Rimbaud” and not Sylvester Stallone’s “Rambo,” discussing the inspiration behind her character song “Our Lady of Pigalle” and introducing her hit “I’m All Right” as a “happy break-up song.”

Peyroux performed all but two songs from her new album, “Bare Bones,” during the course of her 90-minute set. She completely ignored her 1996 debut album “Dreamland,” which may have frustrated some long-time fans. Instead the evening’s remaining songs were split between the two other albums she released this decade.

Opening act Steve Poltz was a welcome addition to the bill. Accompanied only by his acoustic guitar, the singer/songwriter quickly won over the crowed with his frequently funny songs. A rapid-fire talking blues somehow touched on everything from the winter holidays, fruit cake, Barack Obama and YouTube, while “Brief History of My Life” somehow combined Poltz’s love of baseball with stories of his first communion. Poltz is best known for helping Jewel write “You Were Made For Me.” He closed his 35-minute set with “Everything About You,” a song that appeared on the “Notting Hill” soundtrack.

With a night filled with so many stand-out moments – from Peyroux’s sly reading of “You Can’t Do Me,” which she wrote with Walter Becker, to the bouncy optimism of “Instead” – Peyroux left no doubt that her songbook had more legs than a glass of good wine.

Setlist: Dance Me To the End of Love, Bare Bones, Don’t Wait Too Long, River of Tears, You’re Gonna Make Me Lonesome When You Go, Damn the Circumstances, I’m All Right, A Little Bit, La Javanaise, Don’t Cry Baby, Love and Treachery, You Can’t Do Me, Our Lady of Pigalle, I Must Be Saved, Instead, Somethin’ Grand.

(Above: Brad Mehldau performs an arrangement based on Radiohead’s “Exit Music (For A Film).”

Continuing The Daily Record’s look at the state of jazz today, here is the first of three installments shedding light on 15 jazz greats to emerge in the last 20 years. Note that these musicians are not necessarily the 15 greatest jazz artists to arrive since 1990. A brief listen to any of them, though, should more than persuade the most ardent purist that jazz is alive and well.

Over the past 20 years, Roy Hargrove’s trumpet has proven to be one of the most versatile instruments ever. He’s equally at home conjuring Cuba on his own or summoning the spirit of African rebellion with rapper Common. Although Hargrove has yet found a way to reconcile his split personalities, he has built a strong catalog. In the Roy Hargrove Quintet, Hargrove works the more traditional mold forged by Freddie Hubbard and Clifford Brown. The RH Factor is the less-focused urban playground where Hargrove’s funky side comes out. Albums to start with: Habana, Earfood.

Pianist Brad Mehldau cut his teeth working with saxophonists Joshua Redman and Wayne Shorter before striking out on his own. His lengthy concert arrangements often leave no stone unturned. Although his classical approach to playing is influenced by Bill Evans, Mehldau has no problem converting songs by Radiohead, the Beatles and Nick Drake into extended jazz workouts and placing them on footing equal to George Gershwin and Cole Porter standards. Mehldau made albums with opera singer Renee Fleming, guitarist Pat Metheny and pop producer Jon Brion without pandering on any project. Albums to start with: Back at the Vanguard, Day is Done.

Singer Madeleine Peyroux’s voice sounds more than a little like Billie Holiday, but her style is closer to Joni Mitchell’s. Born in the South, raised in New York and California and seasoned in Paris, Peyroux splits the distance between jazz, folk and pop. Her interpretations of Leonard Cohen, Bob Dylan and Hank Williams numbers made her a star on Lilith Fair stages a decade ago and earned her acclaim as the “Best International Jazz Artist” by the BBC in 2007. Albums to start with: Dreamland, Half the Perfect World.

Puerto Rican saxophonist Miguel Zenon recalls the tasteful, silky tone of Paul Desmond. In little more than five years, he’s released four albums, worked as a founding member of the SF Jazz Collective, won the Best New Artist award from JazzTimes in 2006 and named Rising Star-Alto Saxophone for three consecutive years in the Down Beat Critic’s Poll. While Zenon’s horn rests easily on the ears, his arrangements capture the spirit of his native island through insistent originals and unlikely hymns like “Great is Thy Faithfulness.” Albums to start with: Jibaro, Awake.

Maria Schneider’s compositions for her jazz orchestra have been some of the most ambitious works in the jazz canon since the heyday of the Duke Ellington Orchestra or Dave Brubeck’s late-’60s expositions. At once sweeping and evocative, Schnieder’s near-classical pieces reveal the deep influence of Gil Evans. The cinematic expanse of her work takes the listener on a journey where everyone from George Gershwin to Gustav Mahler is likely to appear. Albums to start with: Evanescence, Sky Blue.

Keep Reading: 15 Jazz Greats to Emerge in the Last 20 Years