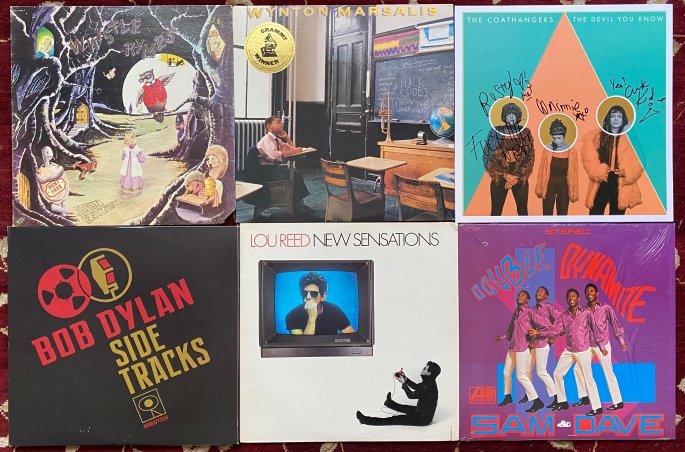 I’m still lost in the catacombs, down in the groove.

Lou Reed – New Sensations (1984) Lou Reed released several endeavors that sound more intriguing in concept than execution, but New Sensations stands out in a deep catalog full of non-sequiturs: It is relentless optimistic both lyrically and musically. I have no idea what put Reed in such a good mood, but it is a delight to hear praise impulsive behavior on “Doing the Things that We Want To,” turning the Detours’ “Do You Love Me” sideways for “I Love You, Suzanne” and celebrating a compatriot on “My Friend George.” If this sounds slight, fear not. There’s nothing here as lightweight as “The Original Wrapper,” which appears on his next album, Mistrial. New Sensations it a strong conclusion to an incredible – and diverse – trilogy of albums that appeared in consecutive years and represent Reed’s strongest run of material outside of the Velvet Underground.

Coathangers – The Devil You Know (2019) When first playing this sixth release from the all-female Atlanta trio one might think there was a mix-up at the pressing plant. Opening cut “Bimbo” opens with a light, bouncy guitar and piano line and airy vocals. Then the distortion kicks in at the chorus and we realize how the sonic dichotomy supports the song’s lyrics about making assumptions about women. Very clever. “Stranger Danger” employs a similar trick as coquette-ish repetition of the song title plays against more defiant vocals in the verses before all hell breaks loose on the chorus. The song does a great job of capturing #metoo-era menace in under three minutes. “Stranger Danger” sets the table nicely for “Fuck the NRA,” a song as brash and straightforward as its title and the album’s best moment. Clocking in at just over half an hour, The Devil You Know makes it point and quickly departs.

Sam and Dave – Double Dynamite (1966) Soul music abounds with upbeat songs and combos, but I don’t know of any as relentlessly happy as Sam and Dave. You can even hear them smiling during serious ballads like “When Something is Wrong with My Baby (Something is Wrong with Me).” Double Dynamite is Memphis soul at its finest, with Booker T. and the MGs serving as the backing band and Isaac Hayes and David Porter providing songs. The first side of this album has several of the duo’s hits, including “Soothe Me,” “Said I Wasn’t Going to Tell Nobody,” and “You’ve Got Me Hummin’.” The second side is less-known but still great and features a version of Dan Penn and Spooner Oldham’s “I’m Your Puppet.”

Bob Dylan – Sidetracks (compilation) – This collection gathers all the non-album tracks released on box sets and hits collections over the years. The majority of the cuts come from the Biograph box set and are quite good, but I am partial to the songs from Greatest Hits, Volume II, which was a staple in my college dorm room. Dylanologists can rejoice than they no longer need skip through a half-dozen other anthologies for these hard-to-find tracks. Casual fans looking for the hits won’t find them here, but they will encounter a lot of great songs to send them scurrying deeper into the catalog. Non-albums singles like “Positively Fourth Street” and 1999’s Oscar-winning “Things Have Changed” which will satisfy both audiences.

John Entwistle – Whistle Rymes (1972) – John Entwistle solo albums can be a dicey proposition. The majority of them are more miss than hit, I’m afraid. Thankfully, Whistle Rymes (sic), The Ox’s second solo album is a safe endeavor. That’s not to say it’s not for the faint-hearted. The liner notes, penned by Entwistle, is the beginning of a fairy tale about a girl named Boobity. So, yeah. (If this tale was ever completed elsewhere, I don’t want to know about it.) The closing song, “Nightmare (Please Wake Me Up)” is a glorious cacophony of horns, piano, violin and drums. The rest of the album is quite good. Anyone who heard The Who songs “Boris the Spider,” “Silas Stingy” or “Heaven and Hell” and thought they needed some more will be pleased with Whistle Rymes.

Wynton Marsalis – Black Codes from the Underground (1985) The jazz world lost a tremendous gift when Ellis Marsalias, patriarch of the great jazz family passed last week. I saw Marsalis at a small theater in Kansas City about a decade ago with a combo that included his son Jason on drums. Somehow, after the show, a neighbor who played saxophone and went with me had talked our way into joining the band – minus Jason – for drinks at the hotel across the street. I soaked in the conversation and experiences until Ellis arrived. He started telling stories about when Charlie Parker was in Jay McShann’s band. McShann, Ellis said, tried to get everyone to take his young horn player because he was so undependable. “You found him, you keep him!” Ellis remembered the other bandleaders telling McShann as we all laughed.

I mention all this here because I don’t have an Ellis Marsalis album and because there will be other opportunities to discuss the rest of the Marsalis family. I have no doubt somewhere in heaven the newly arrived pianist is sitting in on a heck of a jam session.