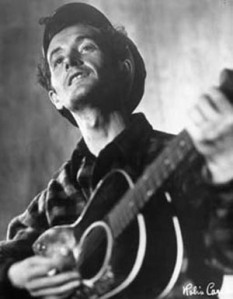 Merle Haggard was on a roll in 1969. In just three years he had racked up seven No. 1 hits and released eight albums. Haggard’s days digging ditches and toiling in prison were finally receding, but he refused to forget the unlucky people he labored beside for so long. “Working Man Blues” was Haggard’s tribute to his fans and his roots.

More than 35 years later, Bob Dylan turned Haggard’s tribute into a personal homage. Abandoning the Bakersfield sound that Haggard helped popularize, Dylan’s “Workingman’s Blues No. 2,” is a nostalgic ballad, introduced by a piano and accented with touches of violin.

Haggard’s “Working Man Blue” is a blazing portrait of a hard-workin’, hard-drinkin’ man with nine kids struggling to make ends meet. In the prime of his career, Haggard’s hero might “get a little tired on the weekend, but “Monday morning, I’m right back with the crew.”

Dylan catches up with a similar blue collar man thousands of shifts later. Worn by hard work and tight budgets, the place he loves best is a “sweet memory.” Too tired to get his boots and shoes, all the weary man can muster is to try “to keep the hunger from creeping its way into my gut.”

Dylan matches Haggard’s detail, but also pulls the camer back a bit, opening with a portrait of “an evenin’ haze settlin’ over the town/starlight by the edge of the creek.” Doubling the number of verses and tripling the song’s length also gives Dylan to explore the weary worker’s love life. The nine kids have moved out and the wife is gone, leaving the fatigued to wonder “am I wrong in thinking/That you have forgotten me?” and imagining his love returning to lead him off to dance in a new suit and a world where he doesn’t have to live on rice and beans.

“Workingman’s Blues No. 2” is less a celebration of the working man than a compliment to Haggard, who toured with Dylan shortly before the sequel was written. At the time it was rumored Haggard would return the favor by penning “Blowing in the Wind 2.” That song hasn’t come to light, but pair of “Working Man” songs provide a perfect Labor Day soundtrack. Play Haggard’s at the outdoor cookout while clutching a cold one; save Dylan’s for some midnight, pre-shift soul searching.

(Below: Merle Haggard’s original “Working Man Blues.” Kick up your heels before the whistle blows.)