“What Does It Take (To Win Your Love)” was Jr. Walker’s second chart-topper and first since 1965’s “Shotgun,” but the two songs couldn’t have been more different. While “Shotgun” was a raw roadhouse rumble with the horn dominating the vocals, “What Does It Take” was a smooth love song designed to drive traffic to the bedroom.

Although Walker penned many of the All Stars’ best numbers, like “Shake and Fingerpop,” “Hip City” and “Last Call,” he handed the reigns over to the songwriting and production duo of Harvey Fuqua and Johnny Bristol in a bid for greater pop success in the late ‘60s.

On paper it looked like a solid decision. Fuqua and Bristol were trusted entities. The latter discovered Walker, and the former gave Walker his first record deal. When Fuqua’s Harvey Records were purchased by Motown, Fuqua, Bristol and Walker became part of the Hitsville family.

While Fuqua and Bristol were successful in taking Walker back to the top of the charts, they did it by depriving Walker of his signature sound. The great saxophone that propelled so many All Stars singles was relegated to anonymous responses that could have been handled by any session player. Walker has overcome his initial microphone shyness to deliver a credible vocal, but his delivery his hardly distinct. All the right elements may be in place, but the product is competently forgettable.

Any thoughts that Walker strayed too far from the sound that made him great are reinforced by Kenny G’s 1986 cover featuring Bristol on lead vocals. 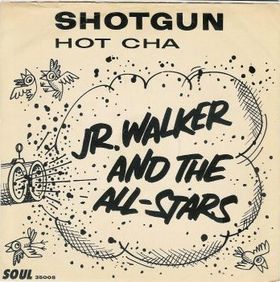 Motown raided the juke joints for Junior Walker’s biggest hit. The song is propelled by Victor Thomas’s Hammond organ as much as Walker’s sax, and is closer to the Southern styling of Booker T. and the MGs and King Curtis than the Motown sound.

At the time, Walker was better-known for his playing than his singing. Initially, a studio singer was booked to sing Walker’s response to the fad dances of the time, like “The Jerk” and “The Watusi.” When the singer failed to arrive, Walker reluctantly stepped behind the mic to cut what he thought would be a guide vocal. Producer Berry Gordy prevailed on Walker to leave the track as-is. Gordy’s judgement was accurate, as the song shot to the top of the chart and inspired several similar singles, including Curtis’ “Memphis Soul Stew.”

Walker’s quartet is rounded out by the sharp guitar punctuation of Willie Woods and the solid backbeat from drummer Benny Benjamin. – by Joel Francis