Skip to content
(Above: Cracker perform “Take Me Down to the Infirmary” at Crossroads in Kansas City on July 6, 2007.)

As the 1980s morphed into the 1990s, David Lowery was riding high. The underground band he started in 1983 had attained major label success, and his new band, Cracker, continued to ride that wave. His songs “Low” and “Teen Angst (What the World Needs Now)” were all over the radio and MTV.

“To me the real story isn’t that we had bit MTV and radio hits in the early ‘90s,” Lowery said, “but how the band kept going after that for 15 years. We’ve done it by cultivating a loyal following that exists away from the rest of the industry.”

Cracker’s model of relentless touring, taper- and fan-friendly policies and annual weekend destination festival should be instantly recognizable to any jam band fans.

“We all got it from the same place,” Lowery said. “I remember back in Camper (Van Beethoven) days telling people we had more in common with the (Grateful) Dead than the punk scene. Out of all the jam bands, I don’t know how many played with the Dead, but we did.”

The Dead invited Cracker to open for them in 1994 at their annual stand at Autzen Stadium in Eugene, Ore. Lowery remembers well his meeting with Jerry Garcia.

“Apparently when I met Jerry he had just come out of a porta-potty. I went to shake his hand, but the only thing I could think was ‘there’s no sink in there,’” Lowery said. “Jerry told me he totally loved our song ‘Euro-Trash Girl’ and was trying to work up an arrangement so the Dead could play it. Sadly, he didn’t live long enough to get it done.”

Camper Van Beethoven emerged in the early ‘80s, in the Southern California underground rock scene, but didn’t fit comfortably. They definitely weren’t punk and too quirky to be mainstream. Over the course of five albums, Lowery and his band mates carved their own niche. Similarly, Cracker came up in an era where they were too poppy for grunge and too much of a country influence to rest beside other rock bands. In 2000, Lowery revived Camper and splits his time between bands.

“The music business has gone all the way back to where we started, where we had to do a lot of stuff independently, within our own organization,” Lowery said. “It wasn’t a challenge for me, because I learned how from the Camper Van Beethoven days. When the labels started coming apart, we always knew what to do.”

In a way, Lowery and his bands have always operated both on their own and on their own turns. The window of high-profile success was so brief they didn’t consider changing how they worked.

“The alt-rock bubble or financial bubble,” Lowery said, “where any band together for more than two weeks and three shows got signed was such a brief period in the 20 years of Cracker and my 27 years of recording that it almost seems like a fluke. There was hardly time to adjust.”

After seeing Internet entrepreneurs being praised for the books they wrote about their five-year-old businesses, Lowery decided he might have something to say about his 27 years in the music business and started working on a book that’s part memoir and business manual.

“People give record labels way too much importance in their minds,” Lowery said. “I learned some things doing research for my book. Like, very few labels last more than 10 or 15 years. Most collapse or are absorbed. The average lifespan of an A&R man (a talent scout who works as a liaison between the label and artist) is less than four years. The people who have been around a long time, that have all the experience, are the artists and the managers.”

Review: Cracker get on this (again) at Crossroads

Concert Review: Cracker and others at the Wakarusa Music Festival (2006) 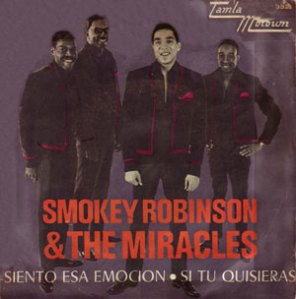 Smokey Robinson was Christmas shopping with fellow Motown songwriter Al Cleveland when Cleveland let slip the malapropism “I second that emotion.” Intrigued, Robinson penned a lyric about a man disinterested in flirting, fishing for long-term love. In other words, it’s the complete opposite of every Kiss song ever.

The arrangement and delivery is relaxed and easy. Never a forceful singer, Robinson lets the horns punctuate his pleas. His vocals are soft and comforting as a pillow, while Miracle Marv Tarplin’s guitar pulls the song over the unusually subdued percussion. There’s no climax or resolution to the number – the horn breakdown in the final moment is as close as we get. It’s almost like Robinson is auditioning the idea.

The song fades before we learn the woman’s reaction, but audiences were delighted, sending “I Second That Emotion” into the Top 5 and earning the Miracles their sixth million-selling single.

Less than two years later, Diana Ross and the Supremes and the Temptations teamed up for a television special and album. “Diana Ross and the Supremes Join the Temptations” featured their interpretation of “I Second that Emotion,” which was a Top 20 UK hit (the single was not released in America). The album marked the debut of new Temp Dennis Edwards, who replaced the troubled David Ruffin. Miracle guitarist Tarplin reprised his role for the all-star revision. The song has a diverse cover life, with performances issued by Jerry Garcia, ‘80s synth band Japan, and “Stand By Your Man” country singer Tammy Wynette. 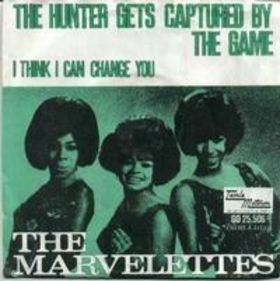 The Marvelettes gave Motown its first No. 1 hit with “Please Mr. Postman,” but that was way back in 1961. But that was five years before “The Hunter Gets Captured by the Game” came out – a lifetime in pop music. The interceding years weren’t too kind. The group found some follow-up success with “Beechwood 4-5789,” but lost a founding member, and famously passed on “Where Did Our Love Go,” which became the Supremes’ first No. 1 hit.

By the mid-‘60s, the Marvelettes had lost another member. Only the success of greatest hits and live albums were keeping the band tethered to the Motown roster. Then Smokey Robinson entered the picture.

Robinson penned “Don’t Mess With Bill,” the comeback single for the now-trio. His pen also produced “The Hunter Gets Captured by the Game,” sung by Wanda Young, wife of Miracles’ guitarist Bobby Rodgers.

The lyrics are straightforward, but what makes the song is Young’s slinky singing and an equally elastic performance from the Funk Brothers. Check out the great guitar performance holding the whole song together and the great and rare Motown harmonica solo to appear outside of a Stevie Wonder or Shorty Long album.

The Marvelettes found a Top 10 hit with their next single – a remake of Ruby and the Romantics’ “When You’re In Love” – before losing another singer. They carried on with some success, but a full-scale comeback was quashed when the remaining members decided not to follow Berry Gordy to Los Angeles and Young’s pregnancy. After the Marvelettes dissolved, singer Ann Bogan joined New Birth, a soul outfit founded by former Motown staffer Harvey Fuqua.

“The Hunter Gets Captured by the Game” has been covered by Ella Fitzgerald, Raconteur Brendan Benson, Jerry Garcia, Blondie and Massive Attack. A reggae cover by Grace Jones reached No. 87 on the R&B charts in 1980. 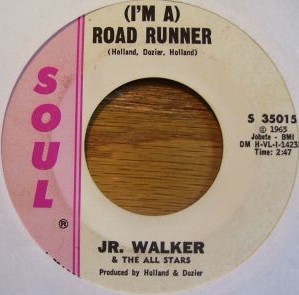 Not to be confused with similarly titled hit by Bo Diddley, or the great pre-punk anthem by the Modern Lovers, this “Roadrunner” is a pure Holland-Dozier-Holland confection. Jr. Walker has clearly overcome his earlier trepidation with the microphone to confidently deliver this paean to the open road. Answering his vocals with stinging sax lines, Walker proves to be his own best all-star. The elastic guitar lines show Shorty Long’s blues influence on the label, while the organ buried in the mix is the subtle glue that keeps the performance together.

The song isn’t even in the Top 5 of Walker’s biggest hits, but it’s held up better than better-charting songs like “What Does It Take (To Win Your Love)” and “How Sweet It Is (To Be Loved By You).”

Walker’s ’60s sax rival King Curtis was the first to cover the song, but the enduring number was also covered by a post-Peter Green, pre-Lindsey Buckingham Fleetwood Mac, Jerry Garcia, Humble Pie, Peter Frampton and, most recently, James Taylor in 2008. – by Joel Francis