Skip to content
(Above: Frank Black visits “Manitoba” all by his lonesome.)

It’s hard to believe, but the Pixies have been around as a reunion act for almost as long as their original incarnation. When Frank Black (aka Black Francis) announced his new project shortly after the Pixies’ first triumphant reunion tour, few could have predicted where he would end up.

“If you’re into the pop music of the 20th century and you happen to be a post-punk record maker, chances are you’ll like Patsy Cline and Miles Davis,” Black said. “Most rock musicians aren’t going to put out a bebop album, so we go to blues, folk, roots music, whatever you want to call it. It’s not that much of a jump for me — it’s all part of the same grassy hillside.”

“The reason why you see this happening again and again is because of the opportunity to play with some of the best musicians in the world,” Black said. “It’s not just country music, but R&B and the whole world of 1950s and ’60s pop recording.”

Black’s collaborators are a world removed from the Boston underground scene where the Pixies formed in the mid-’80s. His album credits today include Muscle Shoals legends Dan Penn and Spooner Oldham, Stax guitarist Steve Cropper and drummer Chester Thompson, pal of Genesis and Frank Zappa.

During sessions in Los Angeles, Black worked with Funk Brother Bob Babbitt, Al Kooper, Phil Spector veteran Carol Kaye and drummer Jim Keltner. Grab any of your favorite major-label albums from the late ’50s to the mid-1970s and at least one of these names will be found on the sleeve.

“I guess you could say the era peaked in the ’60s and got a bad rap in the ’70s, because by then there was just too much easy-listening and knockoff, quickie records,” Black said. “But the people who grew up under the punk badge were young 20-somethings who didn’t have a lot of money and shopped at used clothing stores and decorated their apartments with kitsch. All of a sudden, out come those old Dean Martin albums again. Ultimately, what you rebel against becomes hip again.”

When Black comes to town on Monday, he’ll be without any of his all-star assistants. In fact, Black’s only company onstage will be his acoustic guitar. But regardless of his surroundings, Black said, his goal is the same: to satisfy the customers.

“That’s where I’m at now and it’s no different from when I played my first gig,” Black said.

“It’s all part of the world of the musician. Sometimes you play huge festivals for tons of money in front of tons of people, other times you’re playing Knuckleheads in Kansas City. Both are equally valid.”

Advertisement
(Above: An excerpt from Sufjan Stevens’ 25-minute saga “Impossible Souls” performed at the Uptown Theater in Kansas City.)

It’s unlikely one will ever find a reissue of “Tales of Topographic Oceans” in the record bins at Urban Outfitters or see hipsters sporting Emerson, Lake and Palmer shirts with their skinny jeans. But on Sunday night at the Uptown Theater, indie singer/songwriter Sufjan Stevens delivered a chunk of progressive rock that would have made fans of Gentle Giant and Yes proud.

The earthy folk rock of Stevens’ breakthrough albums – “Seven Swans,” “Michigan” and “Illinois” – has been replaced by electronic, adventurous rock landscapes. About an hour into his two-hour set, Stevens explained the shift saying songwriting was “no longer loyal” to him so he started playing with rudimentary sounds.

Extended segments of noises and effects – particularly on the 25-minute journey “Impossible Soul” – made the set feel more like an art installation that a rock show at times. But whether channeling Genesis and the Flaming Lips or Paul Simon and Cat Stevens, the Uptown’s sold-out crowd hung on every note.

After tossing fans a bone with “Seven Swans,” Stevens and his 11-piece band focused exclusively on material from August’s hour-long “All Delighted People” EP and “The Age of Adz,” an album released this month. The poppy “Too Much” came with a boozy twin-trombone solo and could have been a dance hit in another dimension if not for the extended burps and warbles of guitars, organ and synthesizers in its second half.

As the band delivered its complex themes and arrangements, a large trapezoidal video screen reinforced the themes. Space opera “The Age of Adz” featured a film that looked like an animated Funkadelic album cover. Stevens later explained the number as an “explorative supernatural song about love and heartache” and added that a “broken heart doesn’t always bring the apocalypse, but it always feels like it.”Sure it’s pretentious, but it was also a lot of fun and more accessible than it sounds.

The songs felt intimate despite Steven’s everything-including-the-kitchen-sink approach. This was due in large part to his hushed, soft falsetto and intimate, yet inviting lyrics. Even the most bombastic material contained letters of encouragement, boasting self-affirming lyrics like “don’t be distracted” and “Sufjan, follow your heart.”

Several numbers were delivered with spare arrangements featuring little more than Steven’s voice and finger-picked guitar. “Heirloom” was just as delicate as its title, while “Futile Devices” was a soul-baring tribute to Stevens’ brother.  When Stevens later forgot the lyrics during the quiet “Enchanting Ghost” it only enhanced the intimacy.

Stevens prepped his crowd for “Impossible Soul,” informing them they were about to embark on an “intense, emotional, psychotherapy experiment.” The result was nowhere near as ponderous the introduction or running time implied. “Soul” is less a song than an exploration of a song idea from every conceivable angle. Melodies and themes were tackled via prog-rock, ‘80s dance and autotune before concluding with Stevens gingerly plucking his acoustic guitar. It was enough fun that the band slipped in a bit of Salt and Peppa’s “Push It” and one of the supporting singers danced around the stage spraying silly string.

The crowd’s patience with the new material was rewarded with three songs from “Illinois.” “Chicago” ended the main set and drew the biggest cheers of the night. After saying goodnight, Stevens returned alone and delivered “Concerning the UFO” on piano and “John Wayne Gacy, Jr.” on acoustic guitar. It was a bit creepy to hear the audience sing along with Steven’s haunting portrait of the serial killer and an odd note to end the show on.

As with the rest of the evening’s detours, no one seemed to mind. After five long years, the hero had finally returned to his fans. The path may not have been expected, but the results were just as spectacular.DM Stith: The opening act only got 20 minutes, but he had no trouble silencing the crowd. Armed only with his acoustic guitar, the singer/songwriter delivered four songs very much in mold of Stevens’ most popular work. Using several pedals and a sampler, Stith was able to recreate a percussion section and choir by building then looping a series of claps, stomps and harmony vocals. The trick may not be new, but it was still impressive. Stith’s songwriting was even better. It would be interesting to see what he could do with a full set. Several of his songs may be downloaded for free on the Website for Asthmatic Kitty, the label Stevens founded. 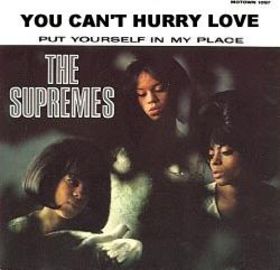 The bouncing bassline that opens this song is courtesy of James Jamerson, the same man who delivered the delightful and legendary three-note thump that introduces “My Girl.”

The intro to Holland-Dozier-Holland’s masterpiece “You Can’t Hurry Love” is a lesson in how to build a Motown hit: Start with the bass and percussion, add some horns (or strings) and then have a pretty voice jump into a catchy verse.

Diana Ross may not have had the prettiest or best female vocal on the Hitsville roster, but by 1966 she had the most recognizable one. And for once her thin tone actually works in her favor. Ross’s voice perfectly conveys the naivety and innocence of a lovelorn girl trying to be patient – “remember mama said,” she sings – to little avail. Ross would seldom reveal so much of herself in song again, hiding behind “big” vocals a la “Ain’t No Mountain High Enough.”

When this song was recorded, Ross was little more than a year away from getting top billing and four years removed from going solo. Even still, Mary Wilson and Florence Ballard are little more than anonymous backing singers in the mix. Although the track is as perfect as a song can be, it’s a shame their talent wasn’t given greater prominence.

While this song may be held up as Exhibit A by haters who think Motown is too slick and soulless, it is also testament to how smoothly the Motown assembly line was working. The song was recorded in just two sessions. Presumably the Funk Brothers laid down everything but the vocals at the June 11, 1966 session and the Supremes added their vocals at the July 5 session. Little more than three weeks later, the single was on the radio. By September, only three months after initial recording, it sat at No. 1 and earned the trio a high-profile performance on the Ed Sullivan show.

“You Can’t Hurry Love” had a renaissance in the 1980s. Phil Collins took it to the Top 10 in 1982, the same year the Stray Cats put it on the flip side of “Rock This Town.” Whoopi Goldberg sang it in her 1986 film “Jumpin’ Jack Flash,” and former Jimi Hendrix/Electric Flag drummer Buddy Miles sang it as the voice of the California Raisins (which, sadly, was the first version The Daily Record heard and its non-oldies radio introduction to classic R&B).