Skip to content
(Above: Branford Marsalis solos and shows off his new drummer, Justin Faulkner, at a 2009 concert.)

Saturday’s Branford Marsalis concert at the Gem Theater was a night of new beginnings.

The show kicked off the 2010-2011 season of Jammin’ at the Gem and featured new bass player Robert Hurst – this was only his second gig with the quartet in as many nights. It even opened with a new song. 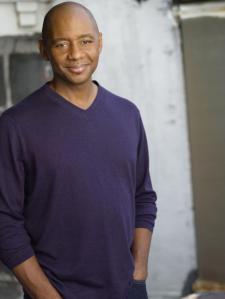 That number, tentatively titled “Joey’s Tune” after its composer, pianist Joey Calderazzo, was a bit of an outlier. Admittedly a work in progress, the arrangement was busy to the point of claustrophobia. When Marsalis stepped back, Calderazzo and drummer Justin Faulkner flooded the room so completely one wondered if Marsalis would be able to wedge his way back in the song.

Fortunately, the rest of the two-hour set fared better. Alternating between soprano and tenor saxophones, Marsalis guided the band through breakneck changes and lumbering mood pieces. Some of his solos displayed the pop sensibilities that made him the go-to hornsmith for Sting and Bruce Hornsby, yet his playing was always challenging, never resting too lightly on the ears.

If the set had one blemish it was that Marsalis seemed too content to introduce a number with a solo, then step away for the rest of the number to let his trio play. Aside from being the best player onstage, Marsalis’ horn was the catalyst that helped the rest of the sounds to coalesce.

“The Blossom of Parting,” a track from Marsalis’ 2009 album “Metamorphosen” was the high point of night. The song opened softly with Marsalis on soprano sax, and Faulkner switching between brushes and mallets to build new textures. Calderazzo’s mesmerizing solo blurred the lines between jazz and classical music, and showed more than a hint of Brad Mehldau’s plaintive style. When the band re-entered, Marsalis gradually built the song’s intensity. Before the song could climax, however, an over-exuberant Faulkner accidentally knocked his ride cymbal to the floor. It wasn’t the ending Marsalis hoped for, but the audience took in stride and responded with a standing ovation.

Faulkner had no problem filling the drum stool occupied by Marsalis’ longtime beatman Jeff “Tain” Watts. On a cover of Thelonious Monk’s “Teo,” Faulkner traded bars with Marsalis with a maturity that outpaced his age of 19 and an energy that underlined it. His solo during a later song recalled another drummer of Marsalis’ acquaintance, Art Blakey.

Hurst also handled himself well, despite sight-reading all of the material. His lengthy solo would have worked better tied to a song than as a stand-alone piece. Aside from that moment, Hurst drew little attention to himself – a positive attribute for now in these new surroundings.

The evening ended with an encore of “St. Louis Blues” that found Marsalis showing off his New Orleans roots and reeling off some Satchmo-like trumpet licks on his saxophone.

Advertisement
(Above: Ahmad Alaadeen plays for Charlie Parker at a 2008 graveside memorial service.)

I grew up in a musical household where classical was the genre of choice. Consequently, I was left to discover everything else on my own.

NPR was my gateway to jazz. The car my parents let me drive in high school didn’t have much that worked (including heat or air conditioning, which ensured I wouldn’t venture too far from home). The radio, however, was fine. On evening drives I switched between KCUR and KANU, both of which had long blocks of jazz into the night.

I couldn’t tell you who was playing at any given moment. If the song didn’t reach me, or the announcers started talking too much I’d hit the button for the other station. Although I didn’t know Mingus from Monk, I did know that this stuff was a heck of a lot better than hearing the same Pink Floyd, Led Zeppelin and Metallica songs for the millionth time on commercial rock stations.

The other jazz fact I knew all too well was that everyone I had heard of was no longer living. Like the classical music my parents enjoyed, the genre was confined to corpses, their legacies entombed with Beethoven and Armstrong. 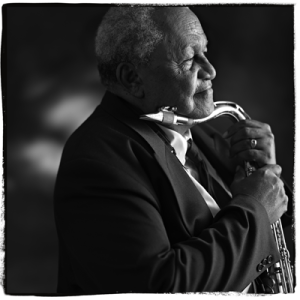 Ahmad Alaadeen was my entry into jazz as a living art form. My sister told me a “guy who played with Billie Holliday” was having a concert in a church near Paseo and Linwood. I convinced a couple of friends to make the trek with me, and we were all blown away. I can’t remember what he played, but I know he played in a trio and the drummer had the tiniest kit I had ever seen. At most he had four pieces, but he did more with those than any of the rock drummers with mega-kits I had seen.

After that show I started paying more attention to jazz shows around town. School prevented me from attending most, but I made it a point to see who had played and check out their music from the library. I also started paying more attention to Kansas City’s role in jazz history. As I did, I realized many of the roads led back to Jay McShann (then still living) and the horn players whom he gave his first jobs: Charlie Parker and Alaadeen. (Both men also shared the same saxophone teacher, Leo Davis.)

It seems strange to say, but I had almost forgotten about that Alaadeen performance until I saw him receive the American Jazz Museum Lifetime Achievement Award last May at the Gem Theater. Clark Terry received the same award that night and, deservedly, most of the attention. Terry, however, only sang two songs and did not play. Alaadeen was right there on the front row of the orchestra, horn in his mouth, blowing several solos during the evening’s tribute to Duke Ellington.

A couple days later, Alaadeen’s neighborhood threw a celebration in his honor. I was able to convince one of my friends who saw Alaadeen with me over a decade before to join our party. As we congratulated Alaadeen on the award, I reminded my friend of that show.

Alaadeen didn’t play that night. He seemed content to sit in his lawn chair, greet fans and take in the neighborhood funk band. We had hoped he would play, but weren’t too disappointed – there would be other opportunities.

None of us could have predicted that in a little more than three months Alaadeen would be gone. Next to the frail Terry on the stage of the Gem, he seemed immortal. Shortly after that weekend he was hospitalized for nearly two weeks. News of his cancer only emerged a few weeks ago before his passing.

In hindsight, this award came at the right time. It was the final show of the 2009-2010 Jammin’ at the Gem series. Who knew he wouldn’t live to see the opening of the next season?

When Alaadeen received another award to honor his work as an educator at the neighborhood party he seemed overwhelmed by the weekend. He stood silently at the mic for a few moments, as if recording everything in his mind. Finally, he spoke.

“I’m at a loss for words,” he admitted. Then he paused. “I will never forget this.”

A tour of KC’s Women in Jazz