With thunderstorms looming on the Doppler radar Saturday night, indie rockers Local Natives took the stage ahead of schedule and wrapped up before the weather portion of the local news aired. No umbrellas were needed.

Crossroads KC was about a third full, with most of the crowd standing comfortably in front of the sound tent. 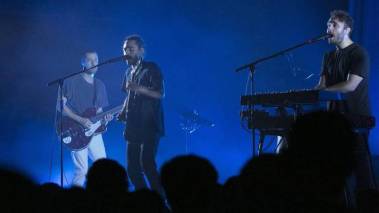 The Southern California quartet expertly generates songs that serve as atmospheric pieces with anthemic vocals. Their sound recalls the National and Fleet Foxes, with a splash of Radiohead and Talking Heads. Electronic textures compliment the soaring, earnest vocals and make the music both easy to dance to and sing with.

The versatile musicians traded roles frequently throughout the night, performing in front of a white curtain, frequently backlit and visible only as silhouettes. The lighting was even more dramatic when the wind whipped through the curtain.

While the scope was cinematic, the songs were compact. It took the band just 80 minutes to deliver 17 songs. “Coins” opened with a funky stop-start rhythm that lifted a lot of hands into the air. Opening act Charlotte Day Wilson joined the band for a duet of “Dark Days.” She danced at her mic between verses, relishing the moment.

One of the night’s most powerful moments came on “Colombia.” Accompanied only by his guitar and Taylor Rice on piano, Kelcey Ayer sang about his mother’s death. The somber moment hovered as the rest of the band returned to the stage for the crescendo.

Somehow, that number segued into “Fountain of Youth,” a poppy new song that references a female president and bounces with a chorus of “We can do whatever we want.” Although the songs were polar opposites, the journey was flawless.

Local Natives’ third album, “Sunlit Youth” was released a little more than two weeks ago, but the crowd seemed familiar with the material. Several of its songs — including “Villany” — drew generous responses. The set list was pretty much split between new songs and material from “Hummingbird,” the group’s second album. A few songs from their 2009 debut were included for good measure.

One of those early songs ended the night on discordant and satisfying note. With Nik Ewing’s bass galloping over noisy guitars, “Sun Hands” recalled “Boy”-era U2. The most boisterous and least contained number of the night ended with low feedback — and rainclouds — hanging in the air as the band waved goodnight.

Review: TV on the Radio