Skip to content
(Above: The Rainmakers perform “Another Guitar,” one of the more subdued moments in a long, rowdy night.)

The Rainmakers took a packed house all over the map Saturday night at Knuckleheads.

Cities like Tokyo, Omaha, Minneapolis, Boston and St. Louis cropped up in “Downstream,” “Snake Dance” and, of course, “Missouri Girl.” Lead singer and songwriter Bob Walkenhorst implored listeners to “walk on the edge of the world” on “Width of a Line” and to visit “The Other Side of the World.” 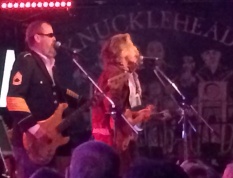 A Missouri native, Walkenhorst also referenced Carroll County, where he grew up, in setting up “Lakeview Man,” and nearby Ray County, the inspiration for “Swinging Shed.”

The four-piece roots-rock band started in the 1980s but took breaks in the 1990s and 2000s. Partway through the night, Walkenhorst mentioned the group’s 25th anniversary reunion show at Knuckleheads nearly four years ago to the day.

“That was intended to be a one-time, thank-you show,” Walkenhorst said. “But there were just too many new songs that kept coming up that needed a home.”

A second batch of songs were given a home late last month on “Monster Movie,” the quartet’s seventh studio album. Early in the show, Walkenhorst thanked fans who had already picked up the new album and promised everyone else a preview.

He wasn’t kidding. The concert opened with “Monster’s first three tracks, and all but two of its dozen songs were played during the night. The new material wasn’t as familiar, but it didn’t take prompting to get fans to sing along to the title song and dance to everything else.

One new song, “Your Time Has Come,” was dedicated to guitarist Jeff Porter’s son, who decided to celebrate his 21st birthday listening to his dad. Two longtime fans from North Dakota who drove in to experience the band in concert for the first time got a shout-out before “Shiny Shiny.”

At more than 2 and a half hours and almost 40 songs, the marathon set gained steam as it progressed. The clock was nearing midnight when the band played around with “Drinking on the Job,” incorporating bits of “Going to Kansas City,” “Hey Paula” and “One Toke Over the Line.”

Admitting he had no idea where the song was heading, Walkenhorst, Porter and bass player Rich Ruth then paused for an adult beverage before finishing “Drinking on the Job.” That number went right into a spirited “Hoo Dee Hoo,” which stormed into “I Talk With My Hands.”

That would have been a perfect ending, but the band decided to make the performance legendary. It returned to burn through another four songs, including a monstrous “Big Fat Blonde,” before finally saying good night.

Even then no one, onstage or off, seemed ready to leave. As the crowd shuffled out, it had more to look forward to, because this show will be almost as much fun to relive in memory as it was to experience initially.

Set list: Sh-thole Town; Monster Movie; Who’s at the Wheel; Tornado Lane; The Other Side of the World; Snake Dance; Save Some For Me; The One That Got Away; Miserable; Missouri Girl; Width of a Line; Long Gone Long; Thirteenth Spirit; Your Time Has Come; The Wages of Sin; Reckoning Day; Believe in Now; Another Guitar; Given Time; Small Circles; Dogleg; Lakeview Man; Swinging Shed; Government Cheese; Spend It On Love; Battle of the Roses; Downstream; Shiny Shiny; Rockin’ at the T-Dance; Information; Drinking on the Job; Hoo Dee Hoo; I Talk With My Hands. Encore: Let My People Go-Go; One More Summer; Big Fat Blonde; Go Down Swinging.