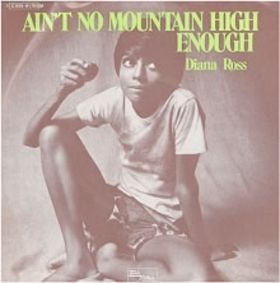 This was the moment. For years, Berry Gordy had been grooming Diana Ross to become a star. First he pushed the hesitant child to the forefront of the Supremes, then elevated her to top billing. Now she was on her own.

Ross’ first single, “Reach Out and Touch (Somebody’s Hand)” was a respectable Top 20 hit. For anyone else, it would have been a brilliant success. But at Motown, and especially for Ross, Top 20 was not good enough. She had to top the charts.

For her follow-up effort, Gordy turned to Nick Ashford and Valerie Simpson, who also penned “Reach Out.” Instead of writing a new number, however, the pair reached back to a song that had been a Top 20 hit for Marvin Gaye and Tammi Terrell three years earlier. Their choice wasn’t well received. Ross was hesitant to cut a song that had already been a hit with someone else. Besides, she had also performed the song when the Supremes paired with the Temptations for a television special and album in 1968.

Eventually, Ross was persuaded to record a re-imagined version of the song. While Gaye and Terrell’s arrangement build upon the synergy of their voices, the new vision opens with Ross’ affirmation of love, like a lonely, long-distance telephone call. The backing chorus of Ashford and Simpson, the Andantes and several other Motown studio singers builds slowly in the background underneath Ross’ promises of devotion. By waiting so long to grow into the refrain, the familiar strain is even more powerful.

When the finished track was submitted to Gordy he was not pleased. He thought the song should open with the chorus (an arrangement Ross later used in her live shows). In a story that mirrors Gaye’s recording of “I Heard It Through the Grapevine,” it wasn’t until DJs started cutting down the six-minute album track and playing it on the radio that Gordy finally acquiesced. Just as before, “Mountain” made a major star out of its singer.

“Ain’t No Mountain High Enough” has been played, performed and sampled so often it sometimes feels like a cliché. It seems every time a director wants a feel-good moment when the underdog triumphs they reach for this song (which must make Gordy, Ashford, Simpson and their bankers very happy). When the song reaches ears voluntarily, however, it is still a delight.