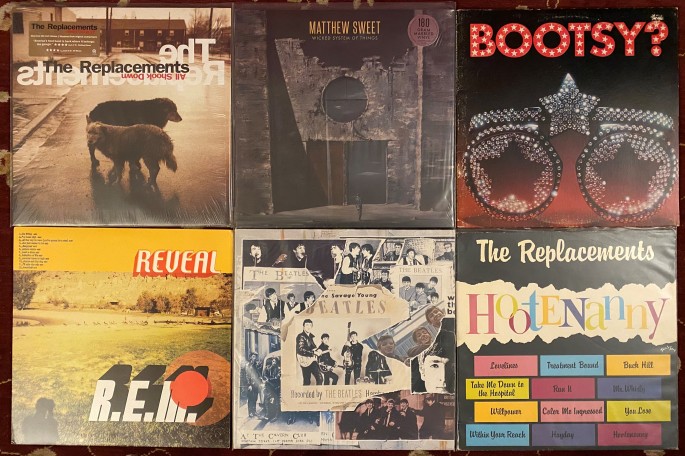 I hope everyone had a good holiday weekend (if you’re into that sort of thing).

R.E.M. – Reveal (2001) I counted down the days to this album’s release after hearing the lead single, “Imitation of Life.” While I still like that song and a few other moments on Reveal, it was the most unsatisfying experience I’d had with an R.E.M. album until that point. Reveal gets off to a strong start with the first handful of songs, but then just kind of floats on its pillows of keyboards. Reveal also receives a strong demerit for failing to include “Fascinating,” one of the band’s best late-period ballads. It was reportedly cut because it sounded too much like the other material, but Reveal’s biggest problem is that it sounds too samey, and few of its songs are as memorable – or beautiful – as “Fascinating.” Hearing Reveal made me wonder if Up, the band’s first album after the departure of drummer Bill Berry, was a fluke. I don’t begrudge the band for pressing on as a trio, but the great moments were further apart.

Bootsy’s Rubber Band – Bootsy? Player of the Year (1978) George Clinton’s P-Funk was a well-oiled machine by the time bass man Bootsy Collins’ their album dropped. Your mileage with Bootsy? Player of the Year will depend on how much you like Clinton’s signature sound. “Bootsy? (What’s the Name of This Town” and “Roto-Rooter” are exactly the type of high-energy funk exercises you imagine them to be. (“Town” even features some funky flute.) “Hollywood Squares” opens with an appropriately theatrical fanfare, complete with tympani. The slow grind R&B workout “Very Yes” features uncredited but very accommodating female singers. The original funkateer is in prime form here.

Matthew Sweet – Wicked System of Things (2018) After a delightful trio of covers albums with Susanna Hoffs, Matthew Sweet finally pivoted back to his solo career. That return featured so many ideas and guests it was split across two albums, Tomorrow Forever and Tomorrow’s Daughter. The Tomorrow follow-up features Sweet stripping down and rocking out in a trio. Wicked System features some Sweet’s most aggressive playing in nearly a decade, but just because the riffs are harder doesn’t mean the album is lacking Sweet’s power pop chops. “Eternity Now” and “Backwards Upside Down” are great pop songs that could easily slot alongside his ‘90s work in a setlist. “It’s a Charade” is a deceptively sunny protest song, thanks to the cheery backing vocals on the chorus. Wicked System of Things snuck out as a Record Store Day release. I’m not sure it is on streaming platforms, but it is definitely worth seeking out if you are a fan of Sweet or power pop.

The Replacements – All Shook Down (1990) The Minneapolis college rock favorite’s second album is a beautiful mess, starting with the opening title track. “Hootenany” sounds like something some drunks would rip through in the basement while warming up. In other words, it’s a perfect encapsulation of the ‘Mats’ IDGAF ethos. “Run It,” the second song turns back to the more familiar sound of the band’s debut. Side one ends with “Mr. Whirly,” another drunken jam free-associating well-known riffs and lyrics. My favorite early ‘Mats song kicks off side two. “Within Your Reach” is the first glimpse of Paul Westerberg’s more sensitive and nuanced songwriting, which would blossom on the next two albums.

By the time of All Shook Down, Westerberg was positioning himself as a Serious Songwriter. While the compositions and performances are undoubtedly better, they also aren’t as much fun. That’s not to say it isn’t a good album. “Merry Go Round,” “Nobody” and “Somebody Take the Wheel” belong on any solid Replacements playlist. “Sadly Beautiful” is Westerberg at his aching, lonely best. All Shook Down ends with a song called “The Last,” a fitting title for what would be the end of the line for the band.

Beatles – Anthology 1 (1995) It’s hard to believe, but right now we are as far from the release of the Beatles Anthology series as that landmark look back was from the end of the Beatles. It’s also hard to believe that something that was seen as the ultimate treasure trove when it came out has become so inessential today. Be honest, when was the last time you listened to any of the Anthology collections? Prior to this, it had been years for me, especially for this first volume. Thanks to all the spoken word interludes Anthology 1 has an audio documentary feel the other collections lack. At times it feels like the only reason a performance is included on the album is because it was featured in the film. It’s great fun watching the Fab Four ham it up on Morcambe and Wise, but hearing only the audio is much less fun (and insightful). Hearing the Decca audition tape and the Quarrymen performances are historically interesting but not musically vital. In other words, I’m glad they’re here and that I have them, but I rarely reach for them.

Of course, the big draw for this set was the reunion track “Free As a Bird.” I liked it at the time and I still enjoy it today. Then again, I am also a big fan of George Harrison, Paul McCartney and Ringo Starr as individual musicians, so I was already standing on third before the first pitch was thrown. Hearing these three interact musically on John Lennon’s recording is a delight, and frankly Anthology 1’s best moment. That’s not to say there aren’t other great songs here. The early versions of “One After 909” and hearing “A Hard Day’s Night” and “Eight Days a Week” are definite high points. But the band was finding their footing more than they were experimenting. That came in the later, superior, Anthologies.