Skip to content
(Above: Diana Ross performs a medley of her disco hits at the Midland Theater in Kansas City, Mo.)

It’s been more than half a century since Diana Ross stopped by the Motown Studios every day, begging to be part of the Detroit record label’s roster. It hasn’t quite been that long since Ross played Kansas City (it just feels that way), but the determination and energy that caught Motown founder Berry Gordy’s eye back then was still on full display Sunday night at the Midland theater.

Ross’ tight, 80-minute set raced through her biggest moments at Motown, encompassing the Supremes, solo albums and soundtrack work. A few covers of songs by influences and contemporaries were sprinkled throughout. As expected, ’60s material generated the most sing-alongs, but the ’70s disco material kept everyone on their feet.

Ross’ 11-piece band deftly handled the shifts from early soul, disco, jazz and adult contemporary. “The Look of Love” opened with a sultry saxophone solo. The song was basically a duet between Ross and the horn player. Ross let one of her backing singers stand in for Lionel Richie on a set-ending performance of “Endless Love.” The band was also given the chance to show off between songs when Ross was offstage changing outfits. The best of these moments was the bossa nova groove that broke out at the end of “Love Child.” 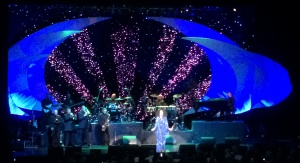 Ross is 70 years old, but she is as glamorous as ever. She changed wardrobe several times, wearing ensembles that matched the mood of the music. She emerged in a cherry-red dress for the exuberant Supremes set and later came out in a sparkling blue gown for the steamy Burt Bacharach and Billie Holiday covers.

The house lights were turned on throughout the evening. Ross explained she loved seeing the crowd enjoying her music because the images stayed with her for the rest of the night. From the sea of outstretched palms on “Stop! In the Name of Love” to the sing-along on “I Will Survive,” Ross likely accumulated a fine stock of moments.

Setlist: I’m Coming Out; Where Did Our Love Go; Baby Love; Stop! In the Name of Love; You Can’t Hurry Love; Touch Me in the Morning; Love Child; The Boss; Upside Down; Love Hangover; Take Me Higher; Ease on Down the Road; The Look of Love; Don’t Explain; Why Do Fools Fall In Love; Theme from “Mahogany”; Ain’t No Mountain High Enough; I Will Survive. Encore: Endless Love; I Will Survive (reprise).

Review: The Temptations and Four Tops