Skip to content
(Above: Civil Twilight drop “Letters from the Sky.”)

Stories of impressionable children seeing the Beatles on the Ed Sullivan Show and deciding to pick up an instrument are legion. Just as copious are examples of songs plagiarizing the Fab Four. Friday’s concert at the Beaumont Club by the South African rock band Civil Twilight is proof that society is finally moving on.

While their parents may have leaned heavily British Invasion acts, the four musicians onstage culled a different, equally rich, catalog. Opening number “Highway of Fallen Kings” revealed the game plan. The piano chords recalled Peter Gabriel’s “In Your Eyes” while Steven McKellar’s vocals were indebted to Sting.More than a few songs were beholden to U2. Andrew McKellar, brother to the band’s singer, threw down a moody guitar homage to The Edge in “Ever Walk.” The other McKellar not only modeled his vocal style on Bono, but his lyrics as well. The song “On the Surface” could have been a “How To Dismantle an Atomic Bomb” outtake, right down to the verse: “To stir humanity, divisions of dignity/to see what will conspire/If I throw myself into its fire.” 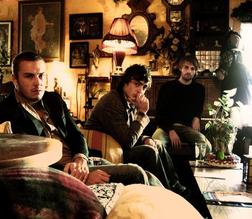 Of course there’s nothing wrong with copying U2, or any band. Coldplay has done it profitably for a decade, right down to hiring the band’s best collaborator, Brian Eno. Radiohead’s critically acclaimed album “The Bends” also owes a debt to Dublin’s finest musical export.

There were several high points in the 90-minute set. The extended reading of “Please Don’t Find Me” ventured into dub territory and “Holy Weather” had most of the room bouncing. After mimicking others’ sounds for most of the evening, Civil Twilight turned a set-ending cover of Massive Attack’s “Teardrop” blend seamlessly with the rest of the repertoire.

For “Quiet in My Town,” Steven McKellar stood onstage alone spent a rare moment conversing with the crowd. After recalling the band’s previous show at the Record Bar, he decided the song would best be delivered from the floor and hopped into the audience for a stirring solo performance. His bandmates returned for the outro and finally cut loose, relieving all the tension that had been building.

A scan of the crowd, which ranged from junior high students to college graduates, revealed at least one chaperone. Although the Beaumont Club was a third full at best, the attraction is obvious: Civil Twilight write catchy songs that perfectly capture a mood. Their familiarity is their biggest selling point. Although the material may have been drawn from the previous generation, it can easily be assimilated and claimed by young listeners as their own.

Whether or not Friday’s concert leads anyone to discover Civil Twilight’s influences on their own is immaterial. Judging by the crowd’s reaction, just being there was enough.

Setlist: Highway of Fallen Kings, Wasted, Every Walk That I’ve Taken Has Been In Your Direction, Shape of a Sound, Trouble, On the Surface, Please Don’t Find Me, Move/Stay, River, Holy Weather, Fire Escape, Letters from the Sky, Quiet in My Town. Encore: It’s Over, Teardrop (Massive Attack cover).