Four tour buses lined the streets near the Power and Light District, each painted with classic album covers and photographs. Their bright colors could be seen from blocks away, heralding the arrival of a six-string circus.

Covered with images of Jimi Hendrix, there was little doubt what brought the caravan of nearly 20 musicians to the Midland Theater on Wednesday. The Experience Hendrix tribute clocked in at nearly three hours, or just slightly longer than the time it takes to play the three studio albums Hendrix released in his lifetime back-to-back-to-back. 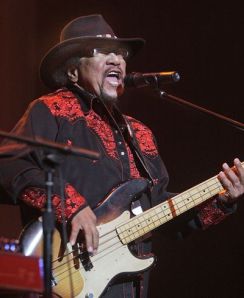 Hendrix’ army buddy and Band of Gypsy’s bass player Billy Cox opened the night and as expected the guitar pyrotechnics started almost immediately. Byron Bordeaux was the first to impress with his solo on “Machine Gun.” A terrific exchange between Dweezil Zappa and Indigenous axeman Mato Nanji on “Manic Depression” was another early high point.

Eric Johnson’s six-song mini-set was the music equivalent of driving with hands firmly planted at 10 and two on the steering wheel and keeping the needle glued to 55. Johnson’s thin, reedy voice was incapable of creating any energy, a trait especially missed on “Power of Soul.” While technically proficient, Johnson’s fretwork also failed to capture the freedom and spontaneity that underlined Hendrix’ work.

Robert Randolph’s segment nailed the other end of the spectrum. The pedal steel stylist had the crowd dancing for all of his set. Randolph was accompanied by the Slide Brothers, and hearing “Purple Haze” performed by three pedal steel guitars placed the classic number in a new context. When bass player/vocalist Henri Brown tried to wrap up “Them Changes,” a tribute to Gypsys drummer Buddy Miles, Randolph kept on playing, eventually leading the ensemble into a gospel romp.

Between the Johnson and Randolph sets, Doyle Bramhall II provided the only acoustic moment of the night with his riveting solo performance of “Hear My Train A-Comin’.” He was followed by an outstanding blues set by Taj Mahal that found Mahal channeling Howlin Wolf on “Catfish Blues” and jamming with Cox on “Hey Joe.”

Kenny Wayne Shepherd also led his band through a three-song set that included a lengthy performance of “Voodoo Child.”

Although the musicians at the front of the stage rotated, Chris Layton, the drummer with Stevie Ray Vaughan and Double Trouble, manned the kit for the entire night. The evening closed with many of the musicians reunited onstage for “Red House.” 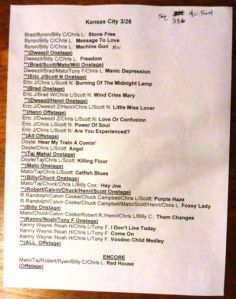