Skip to content
(Above: Jeff Beck takes fans higher with this cover of the Sly and the Family Stone classic.)

After staying away from Kansas City for more than a decade, guitar wizard Jeff Beck has graced city limits twice in a year. The setlist for Saturday night’s concert at a sold-out Uptown Theater may have resembled his y concert at Starlight in APril 2010, but if anyone had a problem with the encore performance they did a good job of hiding it. 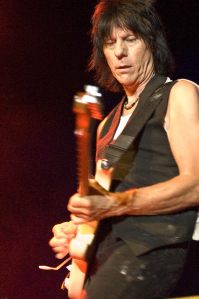 Beck had been touring with a pair of vocalists and a horn section and playing 1950s rockabilly and rock and roll classics, so it was somewhat disappointing to see him take the stage with his standard touring band. Any misgivings were easily brushed aside before the first chorus, however.

The musical structure of all pop songs is repetitive – verse, chorus, verse, bridge. Clever lyrics are a major reason why many songs stay fresh. As an instrumentalist, Beck turned to different tools to keep his music interesting. The guitarist and his backing trio, which included Jason Robello on keyboards, Rhonda Smith on bass and drummer Narada Michael Walden, worked hard to make sure the energy never flagged.

The hour-and-45-minute set shifted smoothly between all-out rockers like “Big Block” and delicate readings of “Corpus Christi Carol” and “Two Rivers.” When the quartet opened up the throttle they created a powerful sound. The rhythm section of Walden and Smith played off each other with a notesy, complementary competition in the vein of Keith Moon and John Entwistle. Robello subtly filled in the remaining colors.

Shunning the microphone set up at extreme stage right for most of the night, Beck did all of his communicating with his hands and arms. A flick of the wrist indicated the tempo, while an outstretched arm highlighted the soloist. By shooting his arm straight up, Beck induced a nifty call-and-response with audience during “Led Boots” and coaxed them into signing the final stanza of “Over the Rainbow.” When a fan seated near the stage was caught recording the performance, Beck wagged his finger back and forth disapprovingly.

Taking the stage in a black suit jacket and matching pants, Beck quickly shed the coat. His traditional attire of arms bare to the shoulders was almost like the magician’s disclaimer: nothing up my sleeves. But like a master illusionist, although Beck’s arsenal was on full display, it was impossible to figure out his tricks. On a fairly straightforward reading of “Over the Rainbow,” Beck played the melody barely moving his left hand on the neck of the guitar. The notes were altered by knobs and bars under his busy right hand.

The Beatles needed a full orchestra for their “A Day in the Life.” Beck had everything he needed beyond his wrists. Tenderly plucking the first verse, he slowly built the song until the grand climax exploded off the stage.

Over the course of the evening, Beck paid tribute to many of his favorite artists, including Jeff Buckley (“Corpus Christi Carol”), Muddy Waters (“Rollin’ and Tumblin’,” featuring White on vocals), Les Paul (“How High the Moon”), Jimi Hendrix (“Little Wing,” with Walden on the mic), Sly and the Family Stone (the lengthy raucous “I Want to Take You Higher”) and Puccini (set-closing “Nessun Dorma”). The styles may have been diverse, but Beck never sounded like anything other than himself.