Skip to content
(Above: Metallica perform with Ray Davies at the 2009 Rock and Roll Hall of Fame 25th Anniversary Concert in New York City.)

Every great song usually inspires about a dozen covers. Most of these are pedestrian and instantly forgotten. The few that transcend the original can be troublesome for the original artist. Should they mimic the new, more popular version or maintain the original vision? Bob Dylan has turned his nightly performances of “All Along the Watchtower” into a sort-of tribute to Jimi Hendrix. Trent Reznor, however, continues to perform “Hurt” as he originally intended, ignoring Johnny Cash’s transcendent interpretation.

Ray Davies wrote “You Really Got Me” in 1964 on an upright piano. The initial sketches suggest a loping bluesy number somewhere between Gerry Mulligan and Big Bill Broonzy, two of Davies’ biggest inspirations at the time.

Davies’ brother Dave had different ideas. Latching onto the riff, and drawing on “Wild Thing” and “Tequilla,” he drove the song through his distorted guitar. The song was born anew, and when Ray Davies heard the new arrangement he knew that’s how his number was supposed to be played.

Unfortunately, the Kinks had already taken the first arrangement into the studio. It was that version that Pye, their label, intended to release as the band’s third single. The Kinks and producer Shel Talmy successfully lobbied for another session to re-record the number with the newfound grit and rawness. The result was the band’s first No. 1 hit in their native England, thereby launching their career.

The Kinks’ next single was essentially a re-write of “You Really Got Me.” Despite the similar success of “All Day and All of the Night,” Ray Davies abandoned that style of writing for the most part for more lilting fare like “Tired of Waiting for You” and “Sunny Afternoon.”

Davies and the Kinks may have moved on, but the rest of the world was just catching up. “You Really Got Me” inspired the signature grimy riff of “Satisfaction,” the feel of “Wild Thing,” and all of “I Can’t Explain.” Heavily distorted guitars became a staple in the burgeoning psychedelic rock scene and, a decade later, the backbone of punk.

In the heart of punk movement, Los Angeles party band Van Halen decided to release their version of “You Really Got Me” as their debut single. Although the song only rose to No. 36 on the U.S. charts, it was tremendously popular, becoming a concert staple throughout the band’s career (and numerous line-ups). 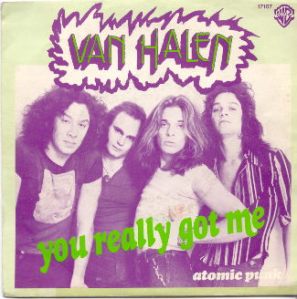 For the most part, Van Halen’s 1978 arrangement of “You Really Got Me” stayed true to the Kinks version. The biggest difference was Eddie Van Halen’s fretboard pyrotechnics. This transformed the song from a proto-punk jam into a guitar hero workout. Matching Van Halen’s instrumental energy was frontman David Lee Roth, whose grunting and moaning punctuated an already-strong come-on.

In 1980, “You Really Got Me” was one of the last cuts on the Kinks live album “One From the Road.” The song had already been released in live format before, on 1968’s “Live At Kelvin Hall,” but this was the band’s first recorded response to Van Halen.

Sadly, the Kinks responded by turning into a Van Halen cover band. An excellent guitarist in his own right, Dave Davies fell flat trying to imitate Eddie Van Halen (as many, many other axeslingers would also discover). Ray Davies’ pinched London voice could not match Roth’s West Coast bravado. Instead of playing to their strengths, the Kinks played to Van Halen’s strong points, thereby undermining themselves and relinquishing ownership of the original “You Really Got Me.”

I mention all this, because this month Ray Davies has elected to release another version of “You Really Got Me” on his new all-star duets album “See My Friends.” Since the Kinks have been on hiatus since 1996, Davies chose Metallica to back him on this track. Although they are working with the original songwriter, the grunts and asides spewing from Metallica singer James Hetfield make clear that his band is covering Van Halen, not the Kinks. Displaying a leaden stomp that makes Black Sabbath seem nimble, Metallica drain the life from the song as Davies stands helplessly by.

The Kinks original 1964 recording of “You Really Got Me” is a brilliant track. Van Halen’s cover some 14 years later also remains exhilarating (particularly when it is coupled with “Eruption,” the Eddie Van Halen instrumental that preceeds it on the album). Sadly, we have lost one version in the wake of the other.

Bob Dylan: All Along the Watchtower