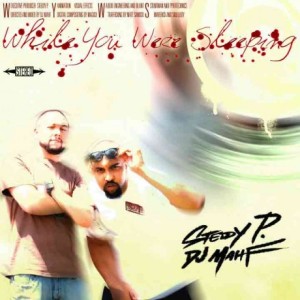 Steddy P takes care of his fans. Since Steddy’s debut album in 2008, fans have never had to wait more than a few months between new offerings. This month Steddy dropped the While You Were Sleeping EP/mixtape to keep fans happy until the emergence of his next full-length album. But While You Were Sleeping is more than a stopgap release. Six new cuts show Steddy’s recent activity in the studio. But more fun is the second part of the album: 13 tracks from the back catalog, remixed by DJ Mahf.

Mahf, who oversaw Steddy’s 2009 album, Style Like Mind, clearly had a blast marrying “Kenneth Arnold” to the “Super Mario Bros.” video game soundtrack. “Miss Your Coffee Table,” one of the few odes to the fairer sex on the mixtape, incorporates both Q-Tip of A Tribe Called Quest and LL Cool J’s “I Need Love.” Other tracks pay tribute to early Kanye West, Jay-Z, DJ Shadow and the Nappy Roots. That Steddy’s original verses stand up against such recognizable backgrounds is a testament to his clever wordplay and intricate delivery.

At times Steddy’s delivery recalls that of Blackalicious’ Gift of Gab. Steddy does a good job of changing textures when necessary, and recruits great guests such as Ces Cru, Mathias and Jbomb to further vary the vocal patterns. Steddy’s best performance across the 19 tracks comes early. “BARS (Loser’s Club Remix)” is Steddy’s answer to repeated invitations to freestyle battles. After calling out so-called Midwestern rappers who quickly vacate to the coasts he revs into double time. It’s not quite Twista-fast, but impressive nonetheless.

Although they appear first, the new tracks almost seem secondary. Steddy comes strong out of the chute on “Enough” and “Bars,” but the production falters on “Steddy Persistence Pt. II,” the third cut. Each song is handled by separate producers. The tracks don’t flow together well, and the quality fluctuates.

On “No Doz” Steddy uses a violent slasher/horror film metaphor to establish his lyrical dominance. His words are threatening, but try as it might, the chintzy synthesizer loop can’t be considered sinister. A similarly vanilla loop is featured in “And It’s Like That,” which manages to include a shout-out to Steddy’s former home turf of Mizzou, to KU and even to the UMKC Roos.

The final new song, “WindOverHead,” is the most successful. The production includes hints of the ambient and industrial, as well as snippets of saxophone and opera over an understated piano melody. Steddy shines across this landscape, calling out Tech N9ne and Mac Lethal and marking his IndyGround territory.

Despite a few minor missteps, While You Were Sleeping is a nice place for longtime fans to regroup and experience Steddy’s catalog in a different light. Newcomers will find the album a handy place to catch up. Best of all, it’s free.

KC’s MCs throw down this weekend