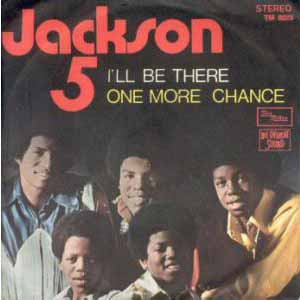 To say that the Jackson 5’s formula was successful would be a terrific understatement. Three upbeat, bubblegum hits, all penned and produced by Berry Gordy and his faceless Corporation, all No. 1 pop and R&B smashes.

Gordy’s decision to break from the formula for the group’s fourth hit was shocking. Not known as one to mess with a sure thing, Gordy dumped the Corporation and partnered with Hal Davis, Willie Hutch and Bob Wests to craft a ballad that placed Michael Jackson directly the spotlight, and relegated his brothers to a support role.

The result was the J5’s most successful single ever, selling 4 million copies in the United States and cementing the band’s career beyond bubblegum. “I’ll Be There” was also the group’s last No. 1 hit; three more singles ceilinged at No. 2.

Only 12 years old at the time, Jackson dumps more emotion into his delivery than many singers twice his age possess. His clarion call to give love another chance is graceful and penetrating. Gordy positioned Diana Ross as the J5’s mentor – her influence shines in Jackson’s delivery, both in phrasing and tone.

“I’ll Be There” was covered by Mariah Carey and Trey Lorenz as a duet in 1992. The single was her sixth No. 1 hit, but the less said about her treacly reading the better. More interestingly, it appeared on the fourth album by Southern California punk rockers Me First and the Gimme Gimmes in 2003, who frequently recorded ironic covers. “I’ll Be There” graced two other Motown releases. The Temptations recorded a version for their 2006 album “Reflections” and sister La Toya Jackson cut it for her 1995 covers album. Many artists, including Carey, the New Kids on the Block, Jaime Foxx and Ne-Yo and Green Day performed “I’ll Be There” in tribute to Jackson after his death on June 25, 2009.

Michael Jackson performed “I’ll Be There” on all of his solo tours, frequently getting emotional and breaking down mid-song.