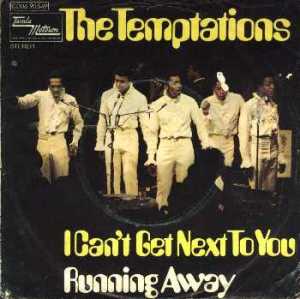 Surprisingly, “I Can’t Get Next To You” was the first Temptations single to top both the pop and R&B charts since “My Girl,” five long years before. Although these Temptations featured 80 percent of that lineup – David Ruffin had been replaced by Dennis Edwards – the group had been handed off from Smokey Robinson’s smooth, straightforward approach to Norman Whitfield’s groundbreaking psychedelic arrangements.

In other words, just because they had the same name and most of the same members, the Temptations of “My Girl” were long gone by the time “I Can’t Get Next To You” reigned at No. 1.

The song opens with canned applause and a barrelhouse piano roll that sets the song in an old parlor or juke joint before the chicken-scratch and wah guitars thrust the song into the future. Just as they did on the previous year’s “Cloud Nine,” the five Tempts trade lines, adding kinetic energy to the track. The guitars, electric piano and insistent drums and percussion make the song feel like a cousin to something Sly and the Family Stone would have cooked up. When Edwards finally erupts with the line “girl, you’re blowing my mind,” the song carries the same intensity and sexuality of James Brown’s hard funkin’ “Sex Machine.”

There was very little happening on Motown like this at the time. Ironically, the next act to incorporate this much funk was a group aimed at a younger audience, the Jackson 5. They Indiana quintet re-appropriated the bridge from “I Can’t Get Next To You” for their 1970 hit “ABC.”

One year after it’s mid-1969 release, Al Green transformed the song into a smoldering cry for love. Green eliminated the kaleidoscopic vocals and swirling arrangement, building the song around his voice and a slinky guitar line. The only element these versions hold in common is the lyrics. Green rode his arrangement to No. 11 on the R&B charts.

An unexpectedly versatile song penned by Whitfield and Barrett Strong, “I Can’t Get Next To You” was transformed into a jazz number by Woody Herman, converted to reggae by the Jay Boys and given the pop treatment by the Osmonds and Edwin McCain. Most recently, it was covered by Anne Lennox on her 1995 album “Medusa.”