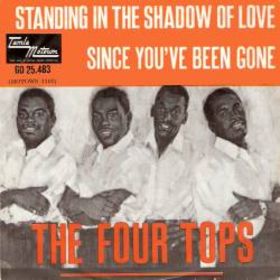 Holland-Dozier-Holland had so much fun and success with the arrangement of “Reach Out (I’ll Be There)” they decided to do it again as “Standing in the Shadows of Love.” Unlike most sequels, this one was just as good and just as fun.

Despite the upbeat arrangement and dance rhythms, this song is as bleak as they come. Check the opening lyrics: “Standing in the shadows of love/getting ready for the heartache to come,” or “You’ve taken away all my reasons for living/when you pushed aside all the love I’ve been giving.” This stuff makes the Cure’s “A Letter to Elise” look like a nursery rhyme.

Levi Stubbs dumps a lifetime of anguish into his vocals. Fortunately, the Funk Brothers take away a lot of the pain. Check out the instrumental version of “Shadows’ from the original master tapes on the second disc of the “Standing in the Shadows of Motown” deluxe edition. The performance there is so strong and tight, the number practically stands on its own. The combination of the Funk Brothers and Four Tops on this song is so propulsive, it’s baffling to realize the song never hit No. 1.

The Jackson 5 put their spin on the song in 1971, but the lads lacked the gravitas to give a convincing performance. Barry White, a man with considerably more weight and emotion in his delivery, added an extended instrumental opening to his 1973 version. The song was turned into a dance number in the ‘80s by France Joli and attempted by Hall and Oates on their 2004 album.

When Aerosmith released this single “The Other Side” in 1990, Holland-Dozier-Holland thought the song bore enough similarity to “Shadows” that they threatened with lawsuit. Aerosmith caved, giving HDH a shared credit with Steven Tyler and song doctor Jim Vallance.