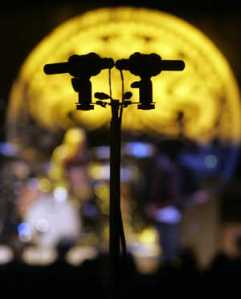 Michael Lindsey looks like any other unassuming music fan, but he’s pretty easy to pick out at a concert. He’s usually standing near the soundboard with an 8-foot mic stand.

A lot of people go to live shows to relax or as a hobby, but Lindsey goes to record what he sees and hears. He’s one of a dozen music fans around Kansas City who call themselves Team Kansasouri, dedicating themselves to capturing and sharing concerts.

“My first exposure to taping was when I was downloading other concerts I had attended,” Lindsey said. “I was frustrated when I was at a show and couldn’t find it online later, so I started recording them myself.”

For Team Kansasouri, the live show is the ultimate demonstration of a band’s mettle.

“A good live recording has a certain vibe, emotion and energy you can’t find on a studio recording,” said team member Brian Price of Eudora. “Look at the later Phish albums. They’re purely academic exercises compared to the live versions.”

According to Clinton Heylin’s book Bootleg: The Rise and Fall of the Secret Recording Industry, some of the first fan concert recordings were made at New York’s Metropolitan Opera House in 1901. Taping reached the mainstream when it received the blessing of the Grateful Dead in the 1970s. While tape trading is very much part of the Dead’s culture, the hobby goes far beyond one genre.

And no matter the type of music that’s recorded, there is one steadfast rule: Shows should never be sold.

“I found a guy on eBay who had the Sting show I made in Columbia and was trying to sell it,” team member Joe Hutchison said. “I fought him all the way to the top and got his auctions shut down.”

“If the selling was prevalent, the bands would stop letting us record,” Price said. “Bottom line: Taping is a privilege, and we’re going to defend our privilege.”

Network on the road

Recording a concert is not for the faint of heart or pocketbook. Lindsey’s gear bag contains two microphones stored in a waterproof plastic container lined with anti-static foam. Cost: $900.

He also has an all-in-one rig with preamp and analog-digital converter. Cost: $900.

And there’s the tripod for the mics, an external battery pack, foam tips for the mics in case of wind, some cables (homemade) and a couple of pieces of just-in-case miscellanea.

“You can spend $10,000 on gear, easy,” Lindsey said. “The good news right now is that because of the economy a lot of guys are dumping their gear. If you’ve got the money, this is a great time to get into the hobby.”

While the rest of the crowd cheers the band as it takes the stage, tapers are hunched over their gear making sure the recording levels and balance are right. Only after the first song and tape are “rolling” can they enjoy the show. Kind of. They must remain watchful of fans trying to steady themselves on a mic stand or fans whose voices could find their ways onto the recording.

“For some reason the mic stand is a beacon for drunks to steady themselves on,” Hutchison said. “You have to be vigilant about your stuff and not be afraid to push people away.”

Other elements can’t be controlled, like weather. Last summer several tapers planned to record the band moe. at an outdoor show but got caught in a 90-minute rainstorm. Most packed umbrellas to protect the gear.

“We got lucky that time because the rain was coming straight down,” Price said. If it were coming down sideways, he said, they would have been forced to shut down.

Getting through the doors with all that stuff isn’t as hard as you might think.

“At first you have to educate the manager that it’s a benefit to allow recording,” Price said. “You might want to print out the band’s taping policy from their Web site and bring it with you. Eventually they’ll come to recognize you and let you in.”

Musical history is being made

After the show, there is an unofficial competition to transfer the show from the recorder to the computer, separate each song into its own track and post the concert online as quickly as possible.

“I’ll be listening in bed at 3 in the morning excited at how good it sounds,” Price said. “But I have to be quiet because my wife is sleeping next to me.”

The Kansasouri tapers generally restrict their recordings to bands and venues friendly to taping. They document all their experiences — from where to set up at a given venue and what microphones to use to the soundman’s name — on taperssection.com, an overwhelmingly comprehensive Web site covering everything from how-to’s and gear reviews to garage sales on used equipment.

“It’s where our knowledge is passed down,” said Randall Phillips of Kansas City. “(The site has) stuff like taping methods and equipment used and other things you couldn’t learn in 10 years. If you run into a problem, someone else has experienced it and is waiting to help you online.”

Most important, it’s a social network. When tapers descended on Clinton Lake last June for the Wakarusa Music Festival, Price hosted a barbecue for everyone. And the same courtesy has been shown to him.

“If I travel to a show in St. Louis or been on vacation and gone to a show,” Price said, “there’s never been a time I didn’t run into somebody I knew.”

Aside from friendships, there are other often unexpected perks. Reggae singer Matisyahu gave out free tickets to tapers for his performance last summer. Other gifts are less conventional.

“I taped an Allman Brothers show from the balcony of the Uptown,” Hutchison said. “It was 100 degrees up there, but the show came out OK. I put it up and traded with a few people. A few weeks later, I got a box of Georgia peaches in the mail from an appreciative fan.”

But ultimate satisfaction comes from knowing a piece of musical history has been preserved.

“This is history for us,” Hutchison said. “We’re archiving it, creating documents of what happened on that night.”

IS IT ARCHIVED?
To find out if your favorite concert memories have been recorded use the search engines on the following Web sites. Keep in mind it may take some online digging to unearth your buried treasures.

•To learn more about becoming a taper, go to www.taperssection.com and click on the first link, “where to begin.” More information is also available at www.flac.sourceforge.net.