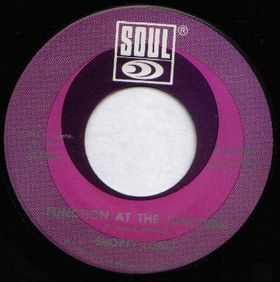 Bluesman Shorty Long always sounded more like a Chess artist than someone on the Motown roster. His 1964 song “Devil With A Blue Dress” sounded like something coming out of a juke joint at midnight. “Function at the Junction,” released two years later, was no less conventional. While Long was one of the few Motown artists in the ’60s allowed to produce himself – Smokey Robinson was another –  he allowed the Holland-Dozier hit machine to apply their shiny production to this number. The result was something that sounded more like Little Richard’s Specialty output of the ’50s than any of the recent HDH hits, but there were a few Motown trademarks. The drums and tambourine are pushed to the front of the mix, but the piano riff propped up by a mean organ that drive the song.

Lyrically, Long’s number is similar to Willie Dixon’s “Wang Dang Doodle” which was a hit for Koko Taylor and Chess the previous year. While Taylor sings of Automatic Slim and Fast Talking Fanny, Long espouses “Ling Ting Tong from China” and 007, who is “bringin’ all the guys from ‘I Spy.'”

The debt “Function at the Junction” owes Little Richard wasn’t lost on the legend, who covered the number in 1971. Two years later jazzman Ramsey Lewis teased the song’s piano strains with his reading. Two decades later, Huey Lewis revived the tune for a greatest hits package. – by Joel Francis