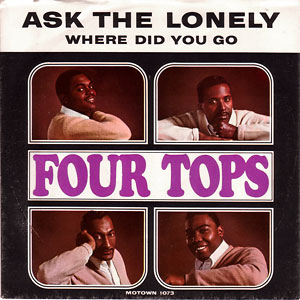 The name on the label says “Four Tops” but this is really a Levi Stubbs record. Stubbs was never one of Motown’s marquee vocalists, and the injustice of that act is amplified by his three-minute tour-de-force singing here. Mickey Stevenson and Ivy Hunter’s song and production is more mature than the typical Motown single. Stubbs’ classic soul voice is imbedded with the “hurting pain” he’s imploring his friend to avoid. The female backing vocals sound silly when they introduce the song, but blend well with the arrangement. The other three Tops are all but absent, but they’re not missed thanks to Stubbs’ heart-wrenching performance.

“Ask the Lonely” is stuck in the Tops’ limbo land. It wasn’t a big hit, but it was too good to be a footnote. The song is still performed at Four Tops concerts today – sans Stubbs’ vocals, of course – but unlike other Motown hits, it never made an impact on the covers circuit. Which is probably just as good. — by Joel Francis