Skip to content
(Above: Hearts of Darkness are one of the biggest bands in Kansas City and a tough act to follow.)

As a live entertainment, hip hop has a bad rap (sorry). The genre’s main criticism – no one’s actually playing instruments – becomes especially acute onstage. While great MCs can deliver a stirring performance backed only by a DJ, the two-turntables-and-a-microphone set-up is the hip hop equivalent of going unplugged. The safety nets are removed and the MC’s skills (or lack thereof) are on full display.

Although he has brought a live band the past several times he’s come to Kansas City, Snoop Dogg decided to forgo live instrumentation for his performance Tuesday night at Crossroads KC. Backed by a DJ, trio of dancers, two hype men and three gentlemen whose job it seemed was to hang out onstage, Snoop delivered lethargic readings of his most celebrated hits. 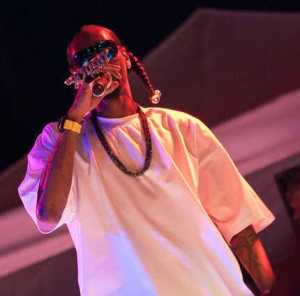 Ironically, Snoop undermined his set by making fans wait more than an hour by listening to a playlist from his catalog. The rap stars belated appearance seemed almost superfluous in context. After listening to pre-recorded versions of his music for so long, having authentic vocals over more pre-recorded tracks didn’t seem that special anymore.

Stage problems also hampered the evening. During the first song, “I Wanna Rock,” the lighting rig gradually started lowering in front of the stage. Unfazed, Snoop and his ensemble continued to perform, nearly obscured. When it happened a second time, however, Snoop stopped the show and addressed the stage manager.

“Why does this (stuff) always happen when Snoop Dogg come on?” he asked.

A spate of hits, including “P.I.M.P.” and “Gin and Juice” got the crowd dancing, but the performance seemed like high-spectacle karaoke or an infomercial with a great chorus. With his DJ doing nothing more than cuing backing tracks and shouting over the songs, Snoop would have been better served dumping the entourage and hiring a live rhythm section to breathe some life into the numbers. Although the crowd responded enthusiastically, the result was nothing that couldn’t be easily found at any of the city’s best hip hop dance clubs.

Opening act Hearts of Darkness didn’t do Snoop any favors. The 70-minute set by the local Afro-beat ensemble may have carried on too long for casual fans, but the interplay between the group’s large horn section and several percussionists kept the crowd dancing despite the withering heat. A cover of Outkast’s “Spottieottiedopaliscious” blended well with the 15-piece band’s original material.

A half hour into Snoop’s set – and more than three hours after Hearts of Darkness took the stage – I succumbed to the weather and the hour and headed for home. The decision may sniff of Old Man Syndrome, but it turned out to be the right call: Snoop himself called it a night less than 30 minutes later.

The high point of the Doggfather’s set was watching the teenagers outside the venue, dance and party on dumpsters across the street so they could see over the fence and watch the rap celebrity. The group was having so much fun they even got a shout-out from the stage. But it’s hard to feel shortchanged when you haven’t paid anything in the first place.