Skip to content
(Above: It was impossible to go anywhere in 1997 without hearing “Iris,” the Goo Goo Dolls’ biggest hit.)

During the mid- to late ‘90s, the Goo Goo Dolls racked up multiplatinum albums, Top 10 hits and Grammy nominations. That was a long time ago, but you wouldn’t know that walking into the Independence Events Center on Thursday night.

“We are small, but we are mighty,” lead singer John Rzeznik told the house, which was better than three-quarters full. As expected, the crowded demonstrated its approval by singing along to “Dizzy” the second of seven cuts from 1998’s “Dizzy Up the Girl” played that night.

By including 11 songs from their 2007 greatest hits album, the Dolls had a surefire set list. Most songs drew a cheer from the opening chords and were long-form exercises in audience participation. Even “Home,” one of five new songs the band bravely tested from their upcoming album, found several fans singing along. 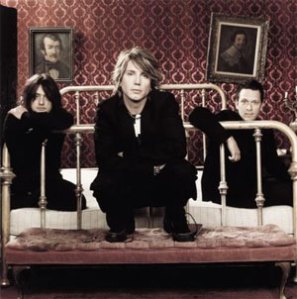 The best numbers were the most obvious ones. “Black Balloon” found the area in front of the stage filled with, what else, black balloons. At times the reactions during “Name” and “Slide” threatened to overwhelm the very vocal-friendly mix.

Touring guitarist Brad Fernquist added some nice slide guitar to Rzeznik’s otherwise solo “Acoustic #3.” “All Eyes on Me” featured a great instrumental coda that provided one of the few times the band stretched out.

The biggest moment, of course, was “Iris.” Rzeznik prefaced it by telling the crowd “we gotta play this one” and everyone reacted to the introduction like they had just walked out of “City of Angels.” After a full performance of the song, the back kicked into it one more time to let the crowd have a solo run through the chorus. They probably could have done it once more and achieved the same result.

Hopping around barefoot on the massive stage, bass player Robby Takac took the mic for four numbers. His rawer songs showed off the influence the Replacements had on the Dolls’ sound. This was especially true on “Another Time Around,” the lone nod to their pre-fame days. Even though it was written more than 15 years later, “Now I Hear,” Takac’s contribution to the forthcoming “Something For the Rest of Us” album, sounded like it could have been cut at the same session.

After blowing their big bullets – “Name” and “Iris” – during the main set, the band returned with another new track and “Broadway,” another “Dizzy” single. The 90-minute set may have not offered many surprises, but everyone got exactly what they were looking for: a fun romp down memory lane.