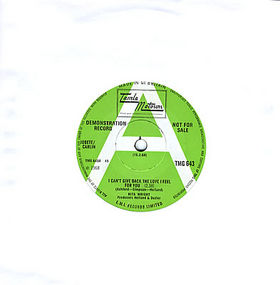 Rita Wright – “I Can’t Give Back the Love I Feel For You,” did not chart

Rita Wright is best known by her 1970s stage name, Syreeta. Before she collaborated with – and briefly married – Stevie Wonder, and scored a handful of Adult Contemporary hits with Billy Preston, Wright was a Pittsburgh transplant working as a secretary for Motown. Wright managed to catch the ear of Brian Holland, who signed her to the label. Holland collaborated with Ashford and Simpson – the songwriting team ironically brought in to replace the defected Holland, his brother Brian and their partner Lamont Dozier – on her 1968 debut, “I Can’t Give Back the Love I Feel For You.”

The song opens with a jarringly dissonant horn line before settling upon Wright’s soft voice. Although her performance is strong, the arrangement betrays the track’s origin as an abandoned Diana Ross and the Supremes cut. Although Ross eventually cut the song as a solo track for her 1971 album “Surrender,” Wright’s version could easily be confused for a lost Supremes track.

Although “I Can’t Give Back” didn’t chart, Wright had a successful recording career. She co-wrote “Signed, Sealed, Delivered” with Wonder and the Spinners’ hit “It’s A Shame.” Her first two LPs, 1972’s “Syreeta” and 1974’s “Stevie Wonder Presents: Syreeta” are hidden soul gems.

Ross’ version of “I Can’t Give Back” came in the middle of a sort of renaissance for the number. Dusty Springfield covered it in 1970 during the sessions to her follow up to “Dusty In Memphis,” the Philly soul masterpiece “A Brand New Me.” The final lineup of the Jeff Beck Group, featuring vocalist Bobby Tench, put their stamp on the song in 1972.