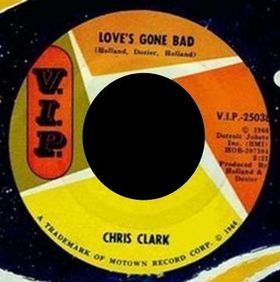 Producers had been looking for a “white singer with a black sound” long before Sam Phillips signed Elvis Presley. But Berry Gordy’s quest definitely added a layer of irony to the process.

Not that Gordy fared any better than the majority of his contemporaries. We can be fairly certain that the assets that drew Gordy to Chris Clark were not vocal.

Nonetheless, Gordy positioned Clark to be Motown – and America’s – answer to Dusty Springfield. He propped her up with songs by Holland-Dozier-Holland and even wrote and produced several numbers himself. Gordy’s favoritism didn’t go over so well at Hitsville. Other artists resented that Gordy spent so much time trying to make a star out of someone who refused to wear shoes, didn’t dress sharply and ate too much.

The public didn’t find much to like, either. Clark’s releases refused to dent the charts. “Love’s Gone Bad,” a HDH composition, was her greatest success, and somehow was enough to earn her the right to cut a full album the next year. 1967’s “Soul Sounds” dropped without a trace. So few copies were pressed that 40 years later it is a rare Motown collectible.

Despite all this, Clark managed to hang around Motown for quite a while. She co-wrote the Oscar-nominated screenplay to “Lady Sings the Blues,” Motown’s 1972 foray into film. That film, of course, starred Gordy’s ultimate protégée, Diana Ross.